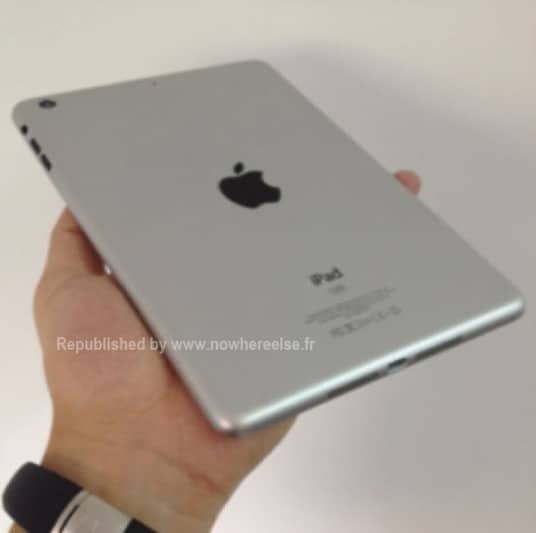 Apple’s planned (and not to mention much awaited) iPhone event is just hours away now and (not surprisingly) we are witnessing a renewed surge of iPad Mini rumors taking center stage all over again. Fueling the fire is an image supposedly of the new smaller sized iPad that first popped up in a Chinese blog DGtle before becoming the latest tablet rage. Of course, Apple isn’t commenting on any of these developments, but our uncertainty is short lived as we will get to the bottom of it once the Apple event is underway.

A smaller sized iPad with a display size of 7.85 inches has been doing the rounds for quite some time now and the last we heard was when there were unconfirmed reports of the smaller iPad to be ready for an October release. This in spite of Apple already having scheduled an event in September. In that respect, the present rumors that Apple might launch the iPad Mini tomorrow does not seem too likely.

Digitimes has chimed in with reports of OEM manufacturers in Taiwan and China already having started the production process with AUO and LG as the supplier of the 7.85 sized display. Also, the displays are being touted to have the same resolution as the 9.7 inch iPad 2, which will ensure enough pixels to deliver a superb viewing experience but not enough to qualify for the Retina Display club.

As for the images, they do look convincing and the delay could well have been worth it after all. The tablet looks sleek and slim with the usual high standards of Apple craftsmanship. The presence of a smaller dock connector that is going to be the standard across all Apple devices further adds authenticity to the images.

Needless to say, the smaller tablet segment characterized by a lower upfront cost will become the most happening tablet segment with the emergence of the iPad Mini. The particular segment is being dominated by the Nexus 7 right now, though the new breed of Kindle Fires is getting a fair share of consumer attention. iPad Mini can be right at the top, though pricing could be crucial here.