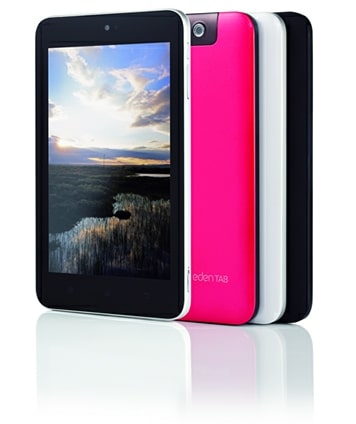 Hackers who are on the lookout for custom ROMs find the MIUI as the best OS. It is, in reality, a customized version of Google Android. The customization gives a new home screen design, as well as some applications that one does not find in the standard Google Android versions. Up until now, the MIUI has only been seen powering a smartphone, though now the EdenTab 7 runs MIUI.

The tablet runs on a 1.2 GHz Samsung processor with a 1 GB RAM and a storage capacity of 16 GB. The 7 inch display has a resolution of 1280 x 800 pixels. For connectivity, the tablet comes with Wi-Fi and Bluetooth capabilities. The MIUI is based on Android 2.3 Gingerbread as of now, but an upgrade of the OS is due to be available soon. Named MIUI 4.0, the OS will be based on the latest Android 4.0 Ice Cream Sandwich.

The EdenTab 7 is only available in Japan right now, and there is no information on how soon that is set to change. The tablet costs $370 in the Japanese market and has TapnowMarket app store pre-installed rather than Google Android Market. It can, however, be expected that with the upgrade to 4.0 version it would also get Google Android market connectivity.