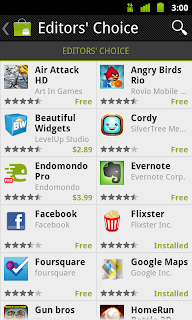 Google has just taken the wraps off their new version of the official Android Market! If you live in the USA you can now rent movies and the top charts are revised. This gives you more options to find quality content.

In the USA, you will have access to the video section of the Android market starting today. Movie rentals begin at a solid starting price of $1.99 and movies can be watched on your phone or tablet. You can either watch the movies being streamed online or download them right to your device.

Google has also made finding applications and games more easier than before. They have issued new sections, such as app of the week, game of the week, and editors choice. The company has also revised the way top new content is shown off.

The new update will be rolling out to Android 2.2 devices within the next few weeks. You don’t need to do anything, the update is automatic on supported phones. If you’re in the U.S., you’ll also be able to download the videos app, rent movies, and buy books once you receive the new Android Market.

update: XDA Developers have issued the upgrade for anyone that wants to install this on their phone or tablet right now. Download it HERE.