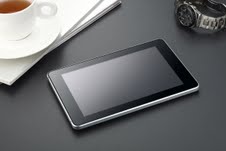 As for the MediaPad, Huawei isn’t spilling all the beans just yet, though the naming of the tablet is perhaps an indication of it having enhanced entertainment features. Huawei is already calling the MediaPad the “smartest, smallest and lightest tablet” ever to come out of the Huawei stable, something that they believe is “guaranteed to transform the consumer’s entertainment experience.”

The tablet has a clear frontal layout with complete absence of any buttons, which perhaps is an indication of it running Honeycomb. The tablet also seems to have a 7 inch display (or maybe even 5 inch) so that if the above two assumptions turn out to be true, the MediaPad will be an interesting addition to the small 7 inch Honeycomb segment. No word either if the tablet is a completely new development or further enhancement of its S7 tablet range, though the former seems to be more possible.

So stay tuned as more comes out on the MediPad in the coming days.