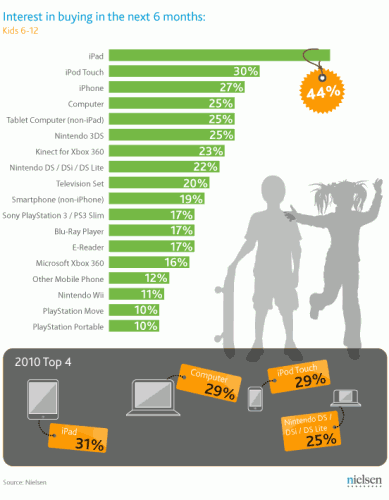 If you thought this holiday season is all about the Kindle Fire, along with a clutch of low cost Android tablets, that’s just not the case. The Apple iPad will not be relegated to just a side role. A survey carried out by Nielsen Company has concluded that the gadget that tops the demands list this holiday season is the ‘good old’ iPad. The survey was carried out among children of the age group 6 -12 and the results prove that children love Apple after all. After iPad, which was voted by 44 percent of the children, came the iPod at 30 percent and then the iPhone at 27 percent. The figures remain nearly the same as that of the year 2010 when the survey came up with 31 percent wanting the iPad, 29 percent wanted a computer, the iPod was voted 29 percent, and the Nintendo DS/DSi/DS Lite has been voted by 10 percent. The study of 2010 also included only children between 6 and 12. For those above 13 years, the iPad continued to be their favorite with 24 percent of them voting for this gadget. The next in the group was for a computer and e-book reader at 18 percent. The study was carried out by Nielsen in October and the size of the survey group was 3,000 children between 6 and 12.