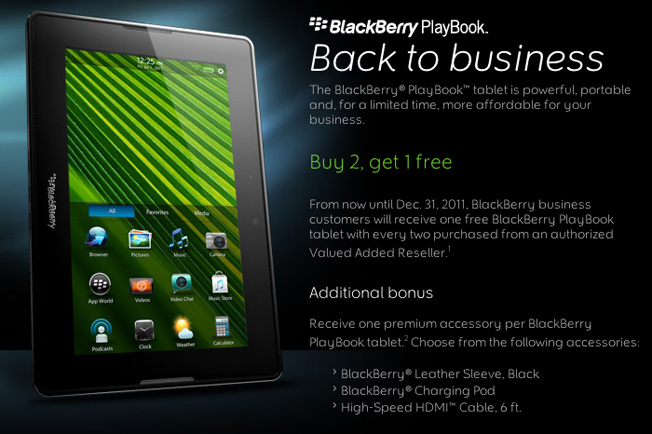 Research In Motion stands firmly committed to their PlayBook tablet device in spite of all the shortcomings the tablet is suffering from in its current form. This is quite unlike what HP did to their TouchPad, though there already are whispers of HP boffins having second thoughts on that. Coming back to the PlayBook, and the latest round of sugar coating it has been endowed with to make it look sweet enough for people to actually splurge on it and wait for sweet times to arrive, buying two of it entitles one to a third PlayBook completely free. The offer its part of RIM’s Back to Business offer and will be in effect until the last shopping day of the year.

However, while the “buy two and get one free” offer boils down to a 33 percent discount in price for each of the PlayBook tablets opted for, the goodies do not stop at that. There is a lot more to be availed of, which includes a black BlackBerry Leather Sleeve, a BlackBerry Charging Pad, or a high-speed HDMI cable measuring 6 feet in length for each of the PlayBook tablet PCs. Also, all of these come completely free, though the offer right now only covers RIM’s preferred retailers that are mentioned at the BlackBerry.com site.

Also, while the offer does look enticing for small businesses, which is what RIM is targeting right now with the PlayBook, it remains to be seen if the PlayBook tablet PCs are picked up en mass as RIM is expecting.