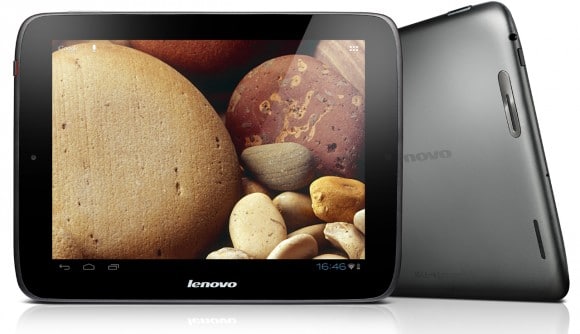 The 9.7 inch IdeaTab S2109 was first shown at the CES  and is now ready for action. Office Depot will have the tablet for sale from June at a price that is sure to turn heads: $349.

For that amount of money, what you get is an Android ICS tablet spread over 9.7 inches on an IPS display. Underneath the hood is a 1 GHz OMAP 4430 dual core CPU that works in conjunction with 1 GB RAM. On-board storage can be up to 32 GB, which is further expandable via USB and microSD cards. Apps can be downloaded via either the Google Play Store or Lenovo’s own app store.

However, one of the biggest pluses with the IdeaTab S2109 is its slim profile, which at just one-third of an inch makes it one of the slimmest around. The tablet will also be easy to lug around, with a weight factor of just 1.29 pounds. Lenovo is also claiming 10 hours of backup time for the tablet that boasts of rich media capabilities. In fact, the IdeaTab S2109 is the first tablet device to come equipped with SRS surround sound speakers. The tablet is also capable of playing back 720p quality videos on its own display but can “throw” 1080p video via its micro HDMI port.

The IdeaTab S2109 will be up against the iPad 2, for which it is priced favorably but might tough competition against the Transformer Pad that is priced at $379 but comes with a more powerful quad core CPU.