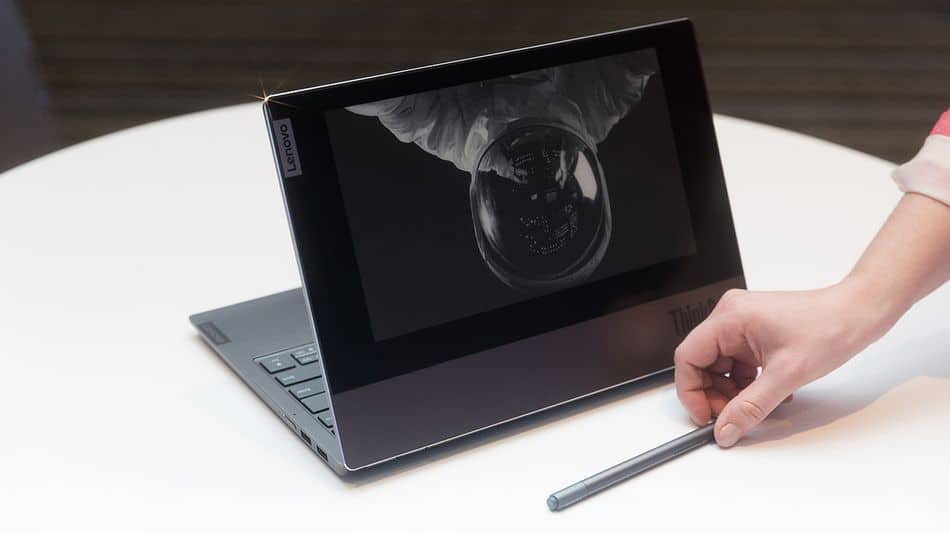 Lenovo just unveiled the ThinkBook Plus, this is the second device the company has issued with an E Ink display. The first was the Yoga Book C930 – a laptop with an E Ink screen in place of the keyboard. The Thinkbook is doing something quite different, they are packing a 10.8 inch E Ink display on the top of lid of the laptop.

Flip open the laptop and you’ll find a 13.3-inch FHD display with 1,920 x 1,080 resolution. On the right side is a power button that also doubles as a fingerprint reader. Additionally, it comes with a variety of ports including a USB Type-C port, two USB Type-A ports, and one HDMI port. There’s also a 3.5mm headphone jack. Meanwhile, under the hood is a 10th-Gen Intel Core i7 processor running Windows 10 Pro. It also comes with an Intel UHD graphics card. As for storage, the ThinkBook Plus is available in two different configurations: 16GB of RAM and 256GB SSD or 32GB of RAM and 512GB SSD. 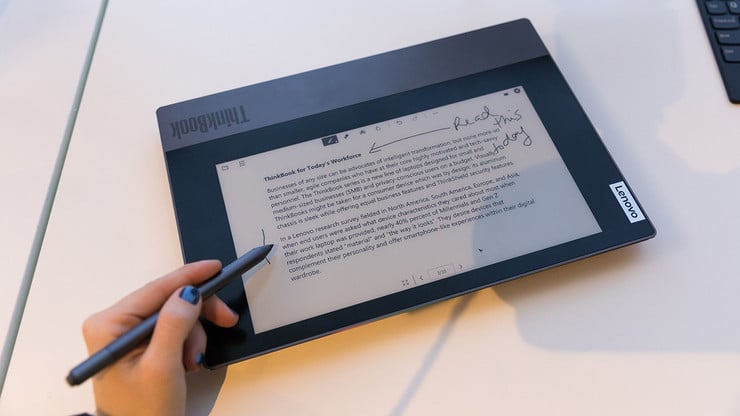 The E INK screen can be used to read Kindle Books or any other e-reading app that is compatible with the Windows Store. It comes with a stylus, so you can draw on the screen too. All of the notes and drawings you make can be synced with Microsoft OneNote, or other apps like Evernote or Dropbox.

Since the E INK screen is on the top of the laptop, when you fold the main screen down, it could get damaged when you are transporting it. You might want to invest in a case and Lenovo developed the ThinkBook Plus Sleeve, which comes in a Charcoal Gray color and has a soft-touch microfiber interior.

If you wanted to draw or take notes on an E INK device, you basically had to purchase a dedicated E-Note, such as the Onyx Boox MAX 3 or the Likebook Ares. This is the first laptop that has a fully functional color screen to do all of the productivity work, but also a secondary screen to read, take notes, make highlights or edit PDF files. The ThinkBook Plus will be available in March 2020, and the line will start at $1,199.