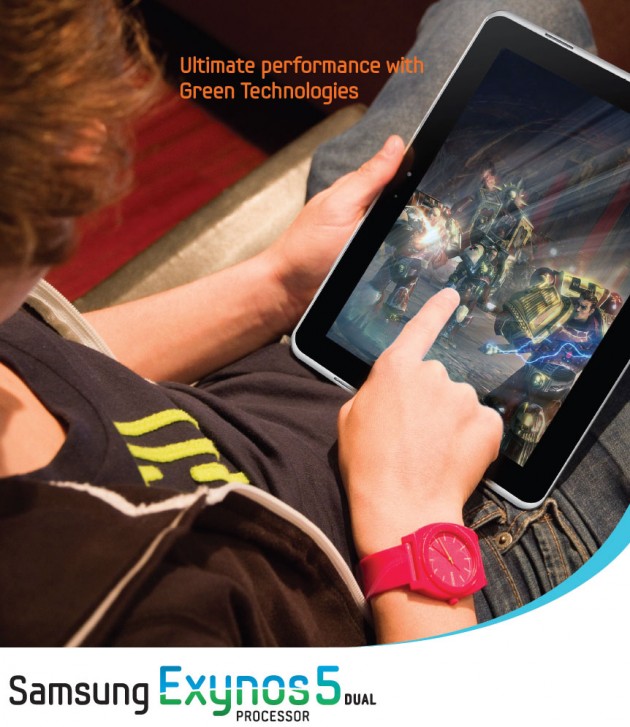 There is a Samsung tablet that exists in rumors. Hardly surprising, as there are as many tablet devices in the form of speculations than in the real world, though the Samsung Galaxy Tab 11.6 is a bit different. The tablet is believed to come with a resolution that is at par with Apple’s Retina Display or maybe even better.

The tablet has been spotted on Samsung’s own webpage that is dedicated to Samsung Exynos 5 dual core processors. Samsung’s earlier 10 inch tablet devices, the Galaxy Tab 10.1N and Galaxy Tab 2, are both powered by the Tegra 2 chip, but it looks to be clear as daylight that the new Galaxy Tab 11.6 will be powered by the Exynos 5 chip or something better. The iPad 3 has just gone live and a Samsung response to that is already due.

Also, given Samsung’s recent spate of court battles with Apple over cases of infringement of the iPad’s design patents, the Samsung design team will work doubly hard to ensure their next tablet is discussed more in tech circles and markets than various courts the world over. Perhaps this should explain why the tablet seen at the Exynos 5 page does carry a striking similarity with the Galaxy Tab 10.1N, a design changeover that has managed to dodge Apple’s legal hawks in Germany and elsewhere. However, this is speculation at best in the absence of hardcore evidence, which means Samsung’s answer to the new iPad could even be seen sporting a radical new design. At least, something of that sort could be seen as a fitting reply to Apple, as well as critics that often accuse the Korean giant for being a “fast executioner,” meaning good at launching its own version of market leading products instead of coming up with its own iconic design.

Coming back to Galaxy Tab 11.6, the tablet device seen at the Samsung Exynos page could be a prototype device used as a technology demonstrator. However, we hope to come across the real thing soon.