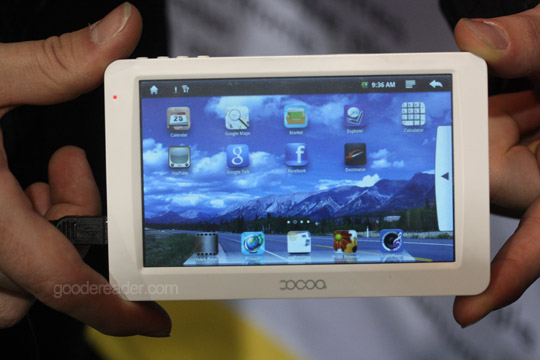 Maylong combines the best of both worlds with its 5 inch tablet GPS combination. A GPS unit with the full functionality of a tablet, what more could you ask for? This means that if you have been using your cell phone or smart phone’s data for GPS coverage up until now, you can rest assured that Maylong has got you covered with its own GPS system, rather than using Garmin or Tomtom’s satellites.

The MG-550 is powered by the Google Android 2.0 operating system and features a 5 inch screen. It’s a full color touchscreen with full internet capabilities, such as Youtube, email, web browser and an alternative Android Market for Applications. Having this device is perfect if you are looking for a cost efficient tablet, or a GPS unit on its own.

It connects to the internet via WI-FI, but we were told a 3G add-on should be available with the release. When we saw an early prototype for this new mini tablet at the Maylong booth, we were blown away on how small and refined it was. It even had some games included, such as Super Mario Brothers.

In my opinion this was one of the more memorable tablets at CES, small enough to fit in your pocket and affordable enough to purchase. It launches in the first quarter of 2011. No price is yet known, but it should be under $250.00