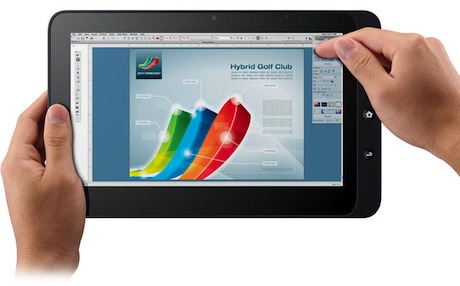 ViewSonic has added one more option in the 10 inch class of tablet PCs that seems to be burgeoning at the moment. However, the ViewSonic offering is different in that ViewPad 10 is a dual booting tablet that comes with both Windows as well as Android 2.2 Froyo as the default operating system. Also, the transition of the tablet from the launch phase to its actual availability has been pretty quick considering the tablet was launched just in February at the Mobile World Congress.

And now, in just about a month’s time, the ViewPad 10 can be availed of from Dynamism with prices starting at $599 for the 16 GB version while the one offering 32 GB of storage coming in at $679.

Also, in case if you have lost track of the ViewPad 10, here is a refresher. The ViewPad 10 comes with a 10.1 inch LED backlit, capacitive multi touch display having a resolution of 1,024 x 600 pixels. The tablet is based on an Intel Atom 1.66 GHz CPU mated to a 2 GB RAM. As for the rest of the specs, the ViewPad 10 will feature a 802.11 b/g/n Wi-Fi, Bluetooth 2.1 + EDR with a 1.3 megapixel camera at the front. The tablet lacks 3G but offers both Windows 7 Home Premium or Windows Professional as the choice of operating system along with of course, Android 2.2 Froyo.