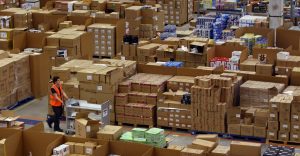 SWANSEA, WALES – NOVEMBER 24: Staff at the Amazon Swansea fulfilment centre process orders as they prepare their busiest time of the year on November 24, 2011 in Swansea, Wales. The 800,000 sq ft fulfilment centre, one the largest of Amazon’s six in the UK and the also the world, is gearing up for for both ‘Black Friday’ and ‘Cyber Monday’. Black Friday is traditionally the discount shopping day that follows Thanksgiving in America and signals the start of the Christmas shopping period. In 2010 it is was reported that over 45bn USD was spent by shoppers in America over ‘Black Friday’ weekend. Cyber Monday, which this year is Monday December 5, and is predicted to be the UK’s busiest online shopping day of the year with over 2 million orders expected to be made. (Photo by Matt Cardy/Getty Images)