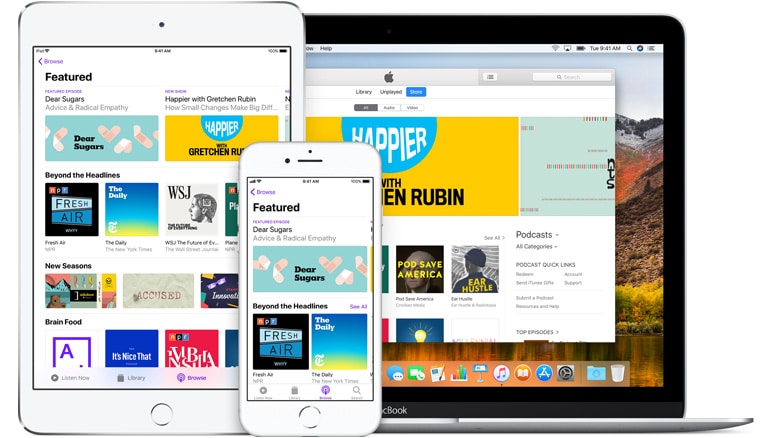 Podcasting is a gateway to audiobooks and the digital publishing industry is well aware. Well known podcasts are getting book deals and doing original audiobook content for Audible and other online retailers. Apple Podcasts has experienced tremendous success and has just hit a major milestone, over 50 billion podcasts have been downloaded or streamed since 2005.

There are currently over 525,000 active shows, with more than 18.5 million episodes available, including content in over 100 languages. Its podcasts span the globe, covering 155 countries and, per Apple, “29 groupings of localized editorial.

The growth of Apple’s Podcasts platform comes as Eddy Cue promised a renewed focus on the media format. Speaking at the Code Media conference last year, Cue promised that Apple had new features up its sleeve for podcasting and said the company should “absolutely” do more.

Podcasting is huge business. 40% of the US population has listened to a podcast – up from 36% in 2016 and 24% listen to podcasts at least every month – up from 21% in 2016. Almost all of the companies involved on the retail side of audiobook distribution see podcasts as a gateway to audiobooks. This has prompted Audible, Tunein, Overdrive and Scribd to all launch their own in-house podcast unit. The belief is that if you give away a bunch of free content, people will end up purchasing a subscription or buy a few audiobooks on a whim.

Publishers are also looking at the success of podcasts. “We’re wondering if books drawn from podcasts might be the new hot thing,” said Jamie Leifer, associate publisher of PublicAffairs, part of Hachette. She notes the remarkable advance sales for “The Storm Before the Storm: The Beginning of the End of the Roman Republic” by Mike Duncan, host of “The History of Rome” podcast for 10 years, and, since 2013, the podcast, “Revolutions.” “We weren’t sure if Mike’s avid fans would convert to readers,” Leifer said in an email. “But I’m thrilled to say that they have.” Two months before the book’s Oct. 24 release date, PublicAffairs had “racked up the kinds of pre-orders in hardcover, e-book and downloadable audio that Hachette usually sees for anticipated franchise fiction releases, not serious history titles.”