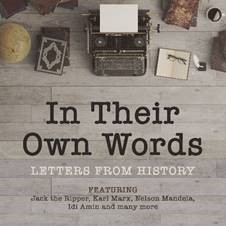 Audible has been making audiobooks lately of some very unconventional things. Nothing personifies their new direction then the new partnership with The National Archives and Bloomsbury. Right now you can listen to letters written by Churchill, Catherine Howard, ‘Jack the Ripper’, the Ford Dagenham women and more.

Audible, The National Archives and Bloomsbury today debut In Their Own Words, an exclusive collection of largely unpublished letters from throughout history. Covering centuries of protest, scandal, cultural revolution and technological innovation the series gives audiences an intimate window into the past, documenting momentous events through personal letters from well-known figures and ordinary citizens alike. Bringing together some of the world’s most shocking, funny and poignant writing, the collection spans some 500 years including everything from Catherine Howard’s adulterous love notes, to the letter that marked the start of Nelson Mandela’s trial.

Tracey Markham, UK Country Manager at Audible, said: “We’re thrilled to have worked with the National Archives and Bloomsbury to bring such a unique and compelling collection of letters to life. From Churchill to the Kray Twins, it’s packed with a weird and wonderful selection of writings, narrated by some of Britain’s finest performers. Whether you fancy a bit of history on the way home from work, or want something to make you feel inspired on your morning run, it’s a great listen for every occasion.”

Dr Hester Vaizey, Publishing Manager at The National Archives, said: “Reading old letters can feel like stepping into a time machine, taking us back to the moment when the author set down their thoughts and feelings on paper. Letters contain the full array of human emotions, from love to hate, from fear to excitement. This anthology of letters has been selected from the 126 shelf-miles of documents held in The National Archives and offers a fascinating insight into the lives of men and women who are no longer with us.”