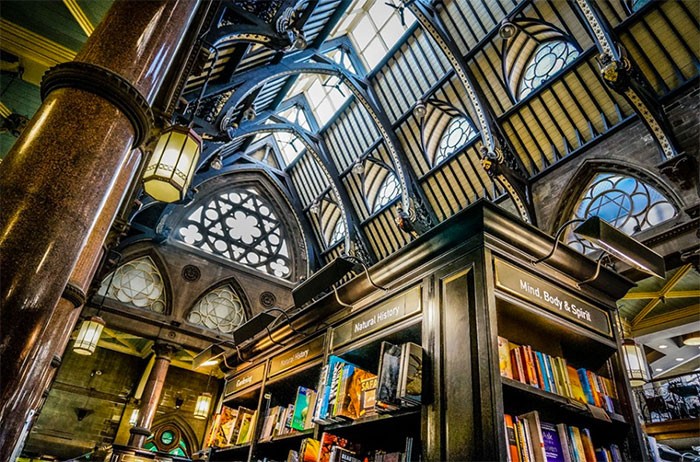 Waterstones was a bookstore that was getting battered by Amazon and ebooks. Every quarter they saw a decline in print sales and in 2011 was $219 million in debt and on the verge of bankruptcy. That’s when  Russian billionaire Alexander Mamut, a banker and investor, in a surprise move purchased the chain for for $68 million and hired James Daunt as the CEO. Within a few short years the chain started to become profitable. Barnes and Noble can learn a lot from the Waterstones turnaround.

One of the philosophies that made Waterstones successful is stores having more control over their location. Daunt said “we want each shop to be distinctive and different, to have its own personality.”  This was accomplished by abolishing an old publisher sales practice of leasing their space at the front of the store and having full control over what titles are promoted. Daunt suspended this agreement, even if it cost him over $35 million pounds per year. Stores can now run their own sales and promote titles that will resonate with the locals. Waterstones is basically a chain of indie bookstores, managers have full control, although they still have to meet sales targets.

While store managers control their mix of in-store merchandise, overall stock ordering is still done centrally by Daunt and a team of buyers. They focus on books deemed browsable and eschew reference, academic and technical tomes. “We’ve moved entirely away from those sort of books. They make for boring bookshops.”

Daunt also buys only a small number of new titles, waits to see if they gain traction with customers, and ramps up orders only if they do.  This results in the number of returns to publishers are kept very low single digits, compared to an industry average of 25%.

One of the things that I like about the Waterstones business model is that they realize that the Kindle and Amazon represent a huge threat to their business model. They have to stay on top of what they are doing in order to pivot or adopt.  The Barnes and Noble Chief Digital Officer Fred Argir famously said he doesn’t care what Amazon does and does not lose sleep over them.

Barnes and Noble has lost over a billion dollars on the Nook and selling ebooks and the company continues to bleed money every quarter running their bookstores. In January their stock hit a 20 year low and over the holidays sales were down 6.4%. This prompted them to hire Timothy Mantel, who has been named Chief Merchandising Officer.

In order for Barnes and Noble to get profitable they have to fire more people who are underperforming and have only people who want to make money selling books, not the people who love books. They need to let stores have greater autonomy over what books they want to showcase or offer deals on. Publishers dictating what books are promoted also needs to be scrapped. B&N also needs to ditch selling Blu Rays, DVDS, VINYL, MUSIC, Audiobooks on Tapes. They need to conduct a full internal audit on general merchandise and get rid of everything that either does not sell well or align with their brand.

Indigo Books and Music is the largest chain in Canada, they years of experimenting they nailed lifestyle brand. Everything they sell in addition to books, comics, magazines, manga and newspapers has something to do with books. Fuzzy socks, pillows, reading Nooks, scented candles and stationary all have to do with enhancing the reading experience. They ironed out a deal with American Girl, which sells super expensive dolls and accessories and is their top seller. The company has had zero debt for years and continues to make money. They will soon be expanding into New Jersey within the next 12 months.

In the end, Barnes and Noble has lost their identity. They do many things poorly, and nothing exceptional. The founder is an old man and is the largest shareholder. If a CEO does not align himself to his vision, he is fired, which is why Barnes and Noble has gone through 3 in four years. The only way things will truly change is if the company undergoes a hostile takeover or if the founder permanently retries.