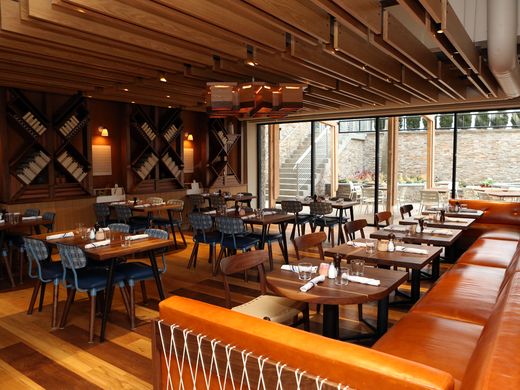 Barnes and Noble is going to be opening their first concept store in Eastchester New York next Tuesday. The 22 thousand square foot location is smaller than the average B&N bookstore and has a number of positive things that will make it a success. It will be the first national chain to feature a full-service restaurant, an outdoor patio and 20 different wines and six beers on tap.

Barnes & Noble brought in chef Sheamus Feeley from Colorado to develop the store’s first menu, matching food with alcohol. The menu features items such as slow-cooked beef short ribs, kale salad and a brisket burger. Entrees range from $14 to $26.

Customers will be able to order a glass of wine and peruse the selection of books with the glass in hand. They will also be able to find the book they are looking for via the iPad kiosks that are placed around the store. They are designed to assist customers looking for books by title or genre through a store mapping tool.

I think Chapters Indigo should try and emulate what Barnes and Noble has done in the United States. Last week the British Columbia government announced that starting in January 2017 bookstores can apply for a liquor license.  I think their existing Granville street flagship store would serve as a great test to turn the existing Starbucks cafe into a true restaurant and serve beer and wine. They could also install a small seating and wine area on the 2nd floor where the vast majority of books are.