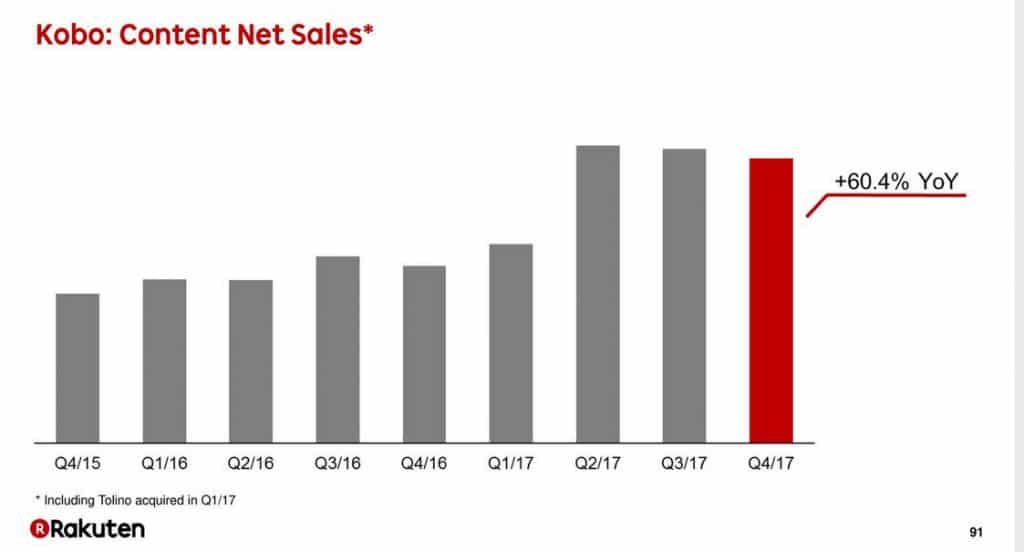 Kobo ebook sales have increased 60% year on year, according to the latest financial report by their parent company Rakuten. This includes the money that Kobo made from purchasing the Tolino assets last year.

Kobo offers its digital reading experience to millions of readers around the world in 190 countries through its website, bookseller, and retail partner network, represented by 17,600 locations around the world. The Kobo bookstore has over 4 million titles across 68 languages, varying from best sellers, self-published works, and magazines to kids’ books.

Kobo hopes to bolster their revenue stream with the audiobook service they launched last year. The audiobooks are sourced from Overdrive and neither party has divulged the exact number of titles are in their catalog. Kobo sells audiobooks on an individual basis, but you can also purchase a subscription.

Sometime this year Kobo will be selling audiobooks and ebooks on the Walmart website and both companies will issue a co-branded app. Kobo e-readers will also be sold in stores and online.

It remains to be seen what type of revenue audiobooks and Walmart cann generate for Kobo and their parent company Rakuten. It is very likely audiobook financials will be reported in May or June of this year and Walmart sometime next year.