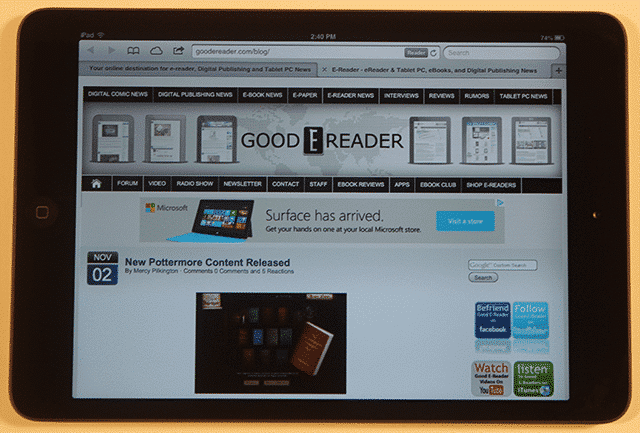 The Apple iPad Mini was the company’s first foray into the highly competitive seven inch tablet segment, though it has a larger screen than the Amazon Kindle Fire HD and Google Nexus 7. I have been using this device every day since it originally launched last week, and there are fundamental flaws with the iPad Mini.

I use the iPad 3 with Retina Display on a daily basis and the lack of high resolution was one of the features sorely lacking on the Mini. The iPad 3 has an amazing resolution of 2048 x 1536, while the Mini has a fairly respectable 1024 x 768. The Kindle Fire HD is the closest competitor to the Mini and it has a resolution of 1280×800, but the screen is around .9 inches smaller.

The size of the display screen and lack of high-resolution are two primary things that have me staying away from the Apple iPad Mini. I have a ton of experience with seven inch devices, such as Blackberry Playbook, Kindle Fire, Acer Iconia A100, Nook Tablet, Skytex Alpha, Kobo Vox, and many more. You would figure that the extra few inches in the Mini would surpass the competition, but this is not the case. I found that the entire UI feels rather small. You basically have the same version of iOS found on the iPad and the same apps will work. The downside is that everything was designed for a 9.7 inch screen, but nothing was optimized for the smaller screen. This results in ALL of the main UI and GUI elements feeling cramped. There is currently no way to increase the size of the fonts that would make the entire Mini more manageable.

Apple highly touts the Retina display that has been the main selling feature with the iPhone 5, iPod Touch 5, and the new iPad 4. It is quite odd that the company never applied it to the Mini, which means magazines, comics, ebooks, and other media will not be delivered in high-definition. If you look at a company like Comixology that powers almost all of the mainstream comic book apps, it looks amazing on most of the modern Apple devices. The same content tends to fail miserably with the Mini, because you don’t get to enjoy the CMX HD formats. Zinio and Press Reader have the same failure to translate to the Mini.

There are a few things the Mini does fairly well. It is very light and easily fits in my sports coat or jacket pocket. The battery life is very solid, and normally lasts around ten hours of constant use. Of course, I have to mention the Apple iTunes, iBooks, and App Store. iOs has more first party releases than any other platform. Finally, the stereo speakers give you a better sound than any of the company’s prior products.

In the end, after using the Mini for hours every day for the last week, I would designate this device as a miss. I really can’t handle the small screen and paltry resolution. Honestly, in the last six months, we have been spoiled by companies releasing super high quality tablets. The high entry price of over $350.00 makes it worthwhile to look at other brands. Instead of buying this one, I would recommend the Kindle Fire HD 8.9, Kobo Arc, or Nook Tablet HD+. All of these tablets have better resolutions and larger screens than the Mini. As a reader, you will benefit from the expansive Amazon or B&N ecosystem. Magazines, newspapers, kids books, enhanced media, videos, and much more are at your fingertips.