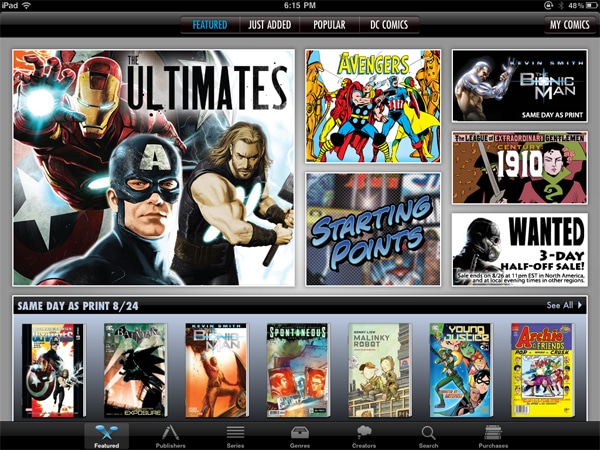 ComiXology is on the cusp of a milestone in its quest to be the leading digital comics provider. Soon it is going to announce the breaking of 100 million graphic novels and comic book downloads. To celebrate, the company is going to give a free comic away, everyday, until the milestone has been reached.

The company originally had started in 2009 and made apps exclusively for the iPhone. It branched off when the first generation Apple iPad launched and enjoyed unbridled success. It is now in the Top 2o Highest Grossing Apps category. Android was the next stage and ComiXology started to offer an official app for phones and tablets. This ensured that people’s purchases stayed with the company as they switched different platforms. In 2011, the company had an official app on the Amazon Kindle Fire that actually came bundled on the device.

“This has been a banner year for ComiXology,” said co-founder and CEO David Steinberger. “We have dedicated ourselves to expanding the comic book audience by delivering the best consumer experience, and it’s fantastic to see that unfold. We started the year cresting 50 million downloads, two and a half years after launch; we added the next 50 million more than three times as fast. We are spreading the love of comics.”

“It’s dizzying to look back at the last 12 months and see that we’ve been the top-grossing iPad app in the entire iTunes App Store almost 90% of all Wednesdays,” said co-founder John D Roberts. “ComiXology’s mission is to bring comics to everyone everywhere and—looking at crossing this 100 million download milestone—it certainly feels like we are making good on that promise.”