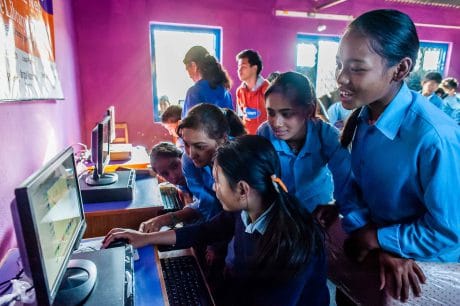 Nepal is the latest country to wake up to the significance of having in place an effective network of libraries for education. Thankfully, the country is pursuing the establishment of digital libraries, with the government already having outlined its intention of creating 1,053 e-libraries in the Himalayan kingdom. This is no doubt a timely move, as Nepal already holds the dubious distinction of having the worst access to education among its population.

Towards this end, the government in Nepal has allocated one billion rupees from the current budget allocation to facilitating access to the internet from schools and libraries. The amount is to be spent by each school’s authorities for procuring five PCs, a printer, as well as establishing internet connections. An e-library has also been inaugurated recently in the Chitwan district, with the District Education Office calling on more schools from the region to avail themselves of the government grant for buying computers.

However, as the President of the Nepal Library Foundation Naresh Koirala pointed out, there is some ambiguity in the entire process as the government has stated their grant is to be spent for buying computers in schools, while the Education Minister, Madhab Prashad Poudyal, has said their government is keen to set up e-libraries in the country with that funding.

Nepal faces an acute shortage of school and educational institutions, let alone a proper network of libraries. This has left it to private players or NGOs to fill the vacuum, though the absence of a coherent national policy on this has ensured there are not enough libraries to cater to its citizens. NLF, a charity organization registered in Canada and a Non-Nepali Residents Association, contributed over 100 computers to a number of schools and community libraries in Nepal between 2007 and 2012, though obviously more of such efforts are needed to ensure that there is enough access to e-libraries in the country.