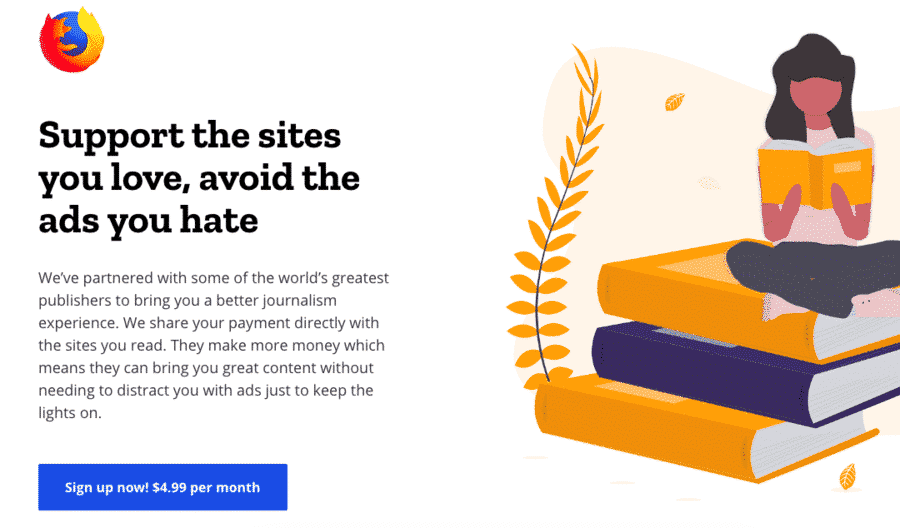 Journalism depends on advertising revenue in order to stay viable. Some users install adblock plugins for their favorite browser to bypass this. Mozilla said earlier this year that a partnership with the news subscription enterprise Scroll would be forthcoming, which is what seems to be coming soon. Mozilla is directing users to a survey that also includes invites to a beta launch of the company’s “Firefox Ad-free internet.”

Mozilla just doesn’t want to block ads, but they want to pay publishers to go ad-free.  They are currently testing their new service with the Atlantic, Buzzfeed, The Verge, Gizmodo, USA Today, Slate and more.  Mozilla is also promising audio versions of the articles and your in-progress articles will be synced across various platforms. Start reading on your PC, and jump on your phone and you can pick up where you left off. The beta is getting a bunch of online feedback, the vast majority of it is positive.

The bulk of Mozilla’s revenue stems from their deal with  Google to be the default search engine in their Firefox internet browser. The company is increasingly interested in diversifying where its money comes in, though, which makes plenty of sense given how direct of a competitor Google is in the browser market. Firefox’s leader said last month that the company will be able to offer paid features “without compromising” the browser’s core offerings.

There is no signup link for publishers get involved in Mozilla’s new adfree platform, but likely this information will come out, once it launches this Fall.