You are here: Home / Digital Library News / Abandoned Walmart in Texas Transforms into a Giant Library 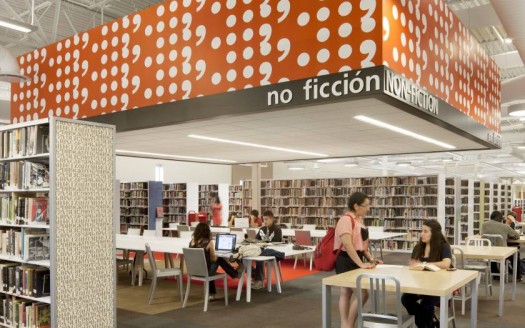 McAllen Texas found itself in the all too common situation of having an abandoned Walmart on its hands. Instead of leaving the location as a target for vandals or opening up another big box store, the city took matters into its own hands. They submitted the location to the International Interior Design Association’s 2012 Library Interior Design Competition and managed to win! McAllen now boasts the largest library in the USA, at 125k square feet!

Meyer, Scherer & Rockcastle, Ltd. of Minneapolis was selected to design the interior of the building, which the city required to be functional, flexible, and affordable to construct. They created a new “Teens” area, which is akin to a modern lounge. It gives the kids a place to go other than the mall or finding trouble across the border in Mexico. Within the first month following the opening, new user registration increased by 23%.

A laser-cut wood wall at the entry folds into a ceiling plane that runs the length of the building, visually dividing the library on the left from the computer lab, meeting rooms and staff areas on the right. It also has hundreds of thousands of books that are ready to be checked out by both a English and Spanish speaking audience.