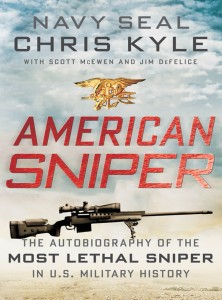 Overdrive has a program called Big Library Read that was originally launched in 2013. Overdrive selects a single title and makes it available every single library that does business with them. The books can be loaned out an unlimited number of times and do not have any wait lists or holds. Overdrive has just announced that American Sniper will be the next e-book and will be made available from March 17-31.

American Sniper tells the true story of the most lethal sniper in U.S. history as Chris Kyle recounts his time spent serving in the military overseas. You’ll also read sections written by his wife, Taya Kyle, sharing her experiences back home as her husband served multiple tours of duty in the Middle East. During the Big Library Read event we will also have a special episode of our Professional Book Nerds podcast with Taya Kyle where she’ll offer unique insight on her and Chris’s lives as well as the experiences many military families go through.