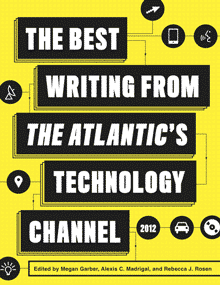 Atlantic Media publishes, among other things, the 150-year-old magazine The Atlantic. It has just released its third ebook and is “…planning a lot more on this score, including original long-form content …” says the press release.  The new ebook, The Best Writing From the Atlantic’s Technology Channel, is available on the Atlantic website for free until the end of the year, at which time it will go on sale at major ebook retailers for $1.99.

Previously the company has published The Obama Presidency, Explained, by James Fallows and The Civil War. Both books are available in normal ebook channels. The press release goes on to give a nice listing of those non-book-publishing companies that have jumped into the ebook fray:

“… USA Today published USA Tomorrow, a collection of expert predictions about the future of America. Harlequin and Cosmopolitan magazine inked a deal to publish several ebooks a month together. Newsweek/Daily Beast entered into a partnership with Vook to publish ebooks. Playboy launched a series of shorts for the Kindle, the Washington Post announced an ebook program, and the Chronicle of Higher Education, a trade publication focused on the higher education field, launched an ebook business. Other notable companies to jump into the space are magazine publishers Conde Nast and Hearst and NBC News, a division of NBC Universal. And the Wall Street Journal has recently rejuvenated its ebook program.”