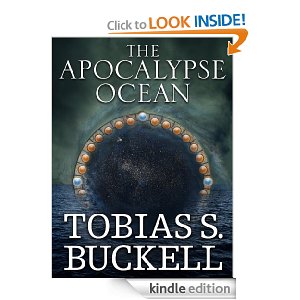 That’s the title of an article by Seth Godin on his The Domino Project Site. According to Godin, the hardest part of publishing a book is getting the first 10,000 copies read and after that, if the book resonates, it should take off. He feels that Kickstarter can solve this problem because an author “… with a tribe can reach out to her readers, activate them and make an offer: if enough of you agree to buy this book today, I’ll write it and send it to you just before a publisher puts it on sale ….” In practice, he says, Kickstarter is “a bit of a nightmare” for an author because of the way Kickstarter is structured and because of the cost of fulfillment and shipping, but he thinks that it is a good method for digital-only publishing.

I can’t comment on his thoughts but I did have an interesting Kickstarter-related publishing experience the other day. I came across The Apocalypse Ocean, by Tobias S. Buckell the other day. The dedication is to “… all my readers who banded together to pre-order the book, thus bringing it into being. Your support has been amazing.”

In the Acknowledgements at the end of the book, he tells how sales of his first three volumes in the series had tapered off and TOR wanted him to get on to other things. However, he says, fans kept telling him they wanted more in the series. He goes on to say: “For a year I conspired with Pablo Defendini [the illustrator], laying out the details of what I hoped would be a successful Kickstarter project for The Apocalypse Ocean that would allow people to preorder the book, and thus crowdfund it into existence.” He says that he had no preconceived notions about whether it would be successful, but they reached their goal and overshot by enough to get Defendini to create a map in addition to the cover. Going back to the Kickstarter site, I see that his goal was to raise $10,000 and he actually got $11,652 in pledges. He got 74 backers of $25, 67 backers of $50, 24 backers of $100, 3 backers of $250 and 3 backers of $1,000. The $1,000 backers received: “Your suggested name will be given to a starship or planetary body (your choice) in the Xenowealth universe. Also have your name immortalized in the book as one of the characters. You will also get to read the book as it is being written, delivered in weekly installments in a special read-along list serv. Trade comments and notes with the author and other readers as the book comes to life. You will also get the finalized ebook upon completion, as well as a signed and personalized limited edition hardcover, with your name in the acknowledgements.” The book was published in ebook form and a limited edition hardcover. He also mentions that he was inspired by successful Kickstarter projects by Mur Lafferty, Tim Pratt, and Tu Publishing.

Exciting stuff, and enough to make conventional publishers quake in their boots!

By the way, even though I’m a huge SF fan, I had never heard of Buckell, but I found myself almost unable to tear myself away from the book and ended up ordering the three earlier books from Amazon. Defendini’s cover is superb and his map is fantastic and looks great on my iPad.