Google Play Books experienced a massive piracy problem  last year and many unscrupulous individuals were uploading other peoples e-books and making a ton of money. You could buy Fifty Shades of Grey, the whole Harry Potter oeuvre and some work by that Game of Thrones guy, George R.R. Martin for only a few dollars each, while the legitimate version cost a heck of a lot more. It looks like Google has mostly solved the piracy issue, but it’s coming at a cost. The Google Play Books publisher submission system has been down for the last eleven months and I have confirmation from a number of sources that it will never be publicly available again.

Google has been fairly ambivalent to e-book piracy on their Play Books service and when Dutch publishers trade group started to investigate the issue they were told by Google rep “I checked the link you’ve shared and noticed that the book in question has been submitted to Google Books by dragonletebooks, through their Partner Program account. As we are not authorized to make changes to a book submitted by a partner through their account, I’d recommend you to contact the publisher directly to request removal of this book. If contacting them doesn’t help, and you believe that this listing violates your rights as a copyright holder, you can file a formal legal complaint and our legal team will review the notice promptly.”

The fact that Google were not taking any active steps in removing pirated books created a media firestorm. Every major newspaper publication started to run with the story, including the New York Times.

The swift action Google was referring to was simply to close the Publishers Portal and no new accounts could be made. have been told by a number of sources that some new accounts are being created, but they had to arrange a meeting with Google at Digital Book World and Book Expo America and meet with the Google Books team face to face. 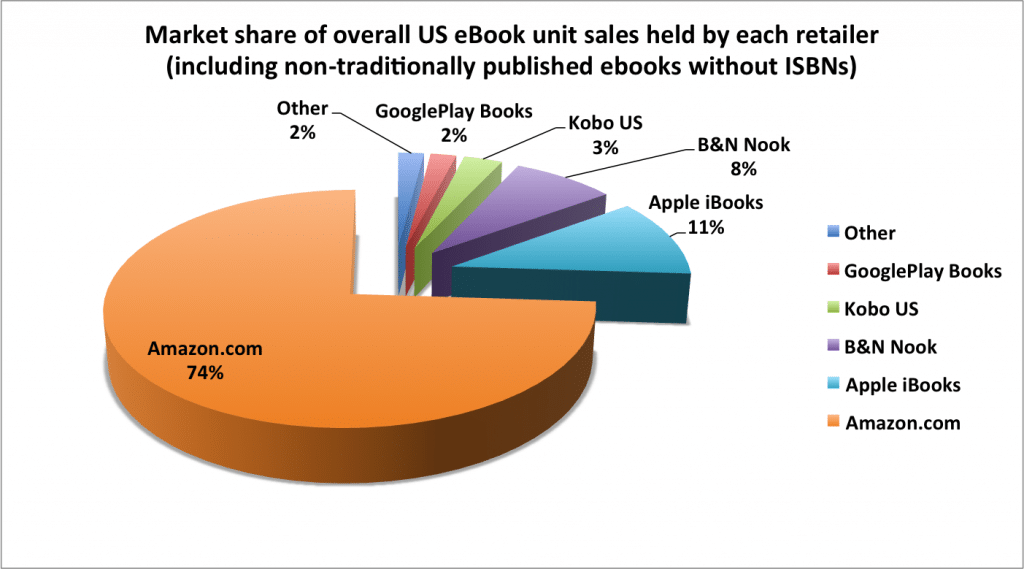 In the US, more than 95% of all consumer ebook purchases — and probably closer to 99% of them — go through just five major ebook retailers. Amazon controls 74% of the US market and Apple’s iBooks store, accounts for roughly 10-12% of US ebook sales. The Barnes & Noble’s Nook store still remains the 3rd largest ebook retailer with about 7-8% of all US ebook sales. Fourth up is Kobo, with about half of Nook’s sales — or maybe 3-4% of the total US market. And finally Google, with around a third of Kobo’s sales, making up 1-2% of today’s ebook market — a surprisingly meager showing for the internet giant.

Selling e-books is just another thing that Google does, but is not a core focus. The company has never implemented the necessary safeguards to prevent e-book piracy and actually has capitalized on it.