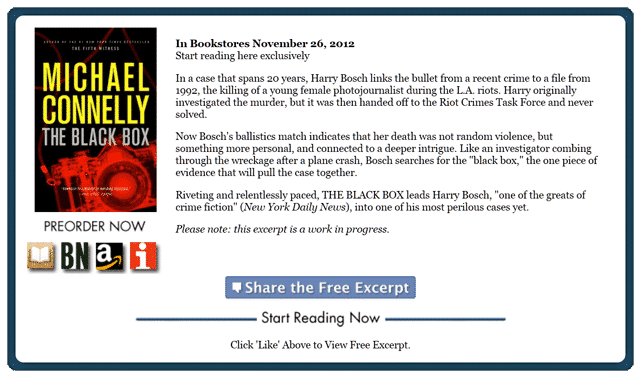 Hachette has just launched an innovative Facebook app called ChapterShare. This will allow  you to read samples of upcoming books directly on the social networking website. You can then pre-order the books or share the books with your friends.

James Patterson and Michael Connelly are the first two authors that Hachettte is promoting with their new Facebook App. The samples are severely lacking at this point and only consist of two paragraphs from both authors upcoming books. The one cool thing about the samples is the direct links to pre-order the books. They have links to Amazon, Barnes and Noble, iBooks, and Indiebound.

I love seeing big six publishers try different things and this new program is the first of its kind on Facebook. The future of ChapterShare will be reliant on how many pre-orders and sales they get from the books.