You are here: Home / E-Book News / Kids love print, will they embrace eBooks later in life? 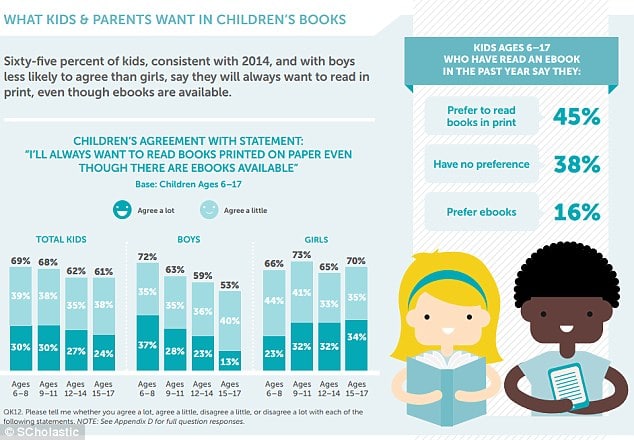 E-Books have only been readily accessible since 2007 with the advent of the Amazon Kindle. Over the course of the past eight years they have been more accessible via e-readers, smartphones and tablets. Are kids more likely to embrace e-books later in life, if they are reading print during their formative years?

Even out of those who’ve read an e-book in the last year, nearly half (45 percent) said they preferred print, while only 16 percent picked the digital format. The remainder had no preference.

Outside of the recent research data by Scholastic and YouGov, parents are split between having their kids read e-books during their early years and some prefer to have them have print.

Jeremy Gates says “My ten-year old daughter reads our Paperwhite every night. She prefers it to a heavy, awkward paper book that requires a light on. I agree with her. I’m of the opinion that if the price of this model would come down to match that of the Fire, a lot more people would figure this out. ”

M.P. McDonald mentioned “My 16 year old daughter prefers print. She loves to look at beautiful covers, and if it’s a hard cover, she will pull the dust cover off to look at the actual cover/binding. (then puts dust cover back on.) However, I think the biggest reason she likes print is because carrying her book of the day/week around school, for her, is how some other person might show off their designer bag or expensive sneakers. ”

Anthony Pero said “My two readers both prefer reading physical books. They are 12 and 8. They both have Kindle Fires. They love the tablets, and will read on them, but mostly use them for games. I asked her why, and my oldest daughter said she just likes turning the pages better. I pressed her, and she admitted another big part was not wanting to waste charge on the books. She hasn’t seen her mom and me read a physical book in some time, other than bible study materials. My oldest is currently reading a book on her phone, but she’s also reading three other physical books at the same time.”

What do the Good e-Readers think? Are kids more likely to grow up reading print, to stick with print to be alone with their thoughts and enjoy a good story or will their constant networked social media world win out in the end?