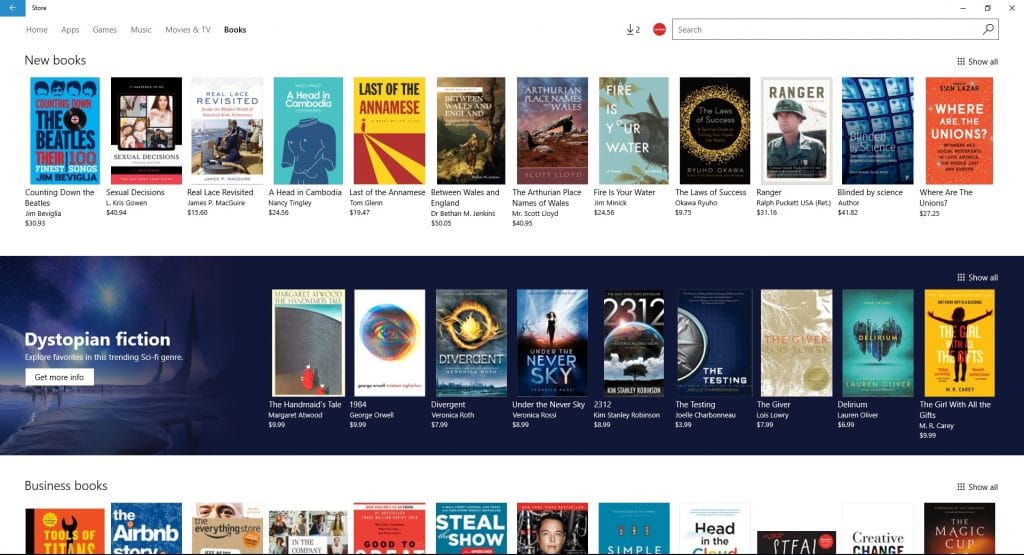 Microsoft has been operating a digital bookstore since late 2017 and they sell ebooks only in the United States and have refused to sell them in other countries. Their store is so feeble that it accounts for less than 1% of all ebook sales.  This is primarily attributed to the Edge browser as being the only way you can read books. Edge only has a paltry 4% adoption rate and many people ignore its pleas to be their default browser.

It is important to note that Microsoft Edge recently launched on Android phones and iPhones, but its e-reading experience is abysmal. The desktop Edge browser is the only fully featured platform that has EPUB/PDF support and the ability to read ebooks or have them read aloud via Cortana.

From 2000 to 2012, Microsoft Reader was the name of an e-book reader that was able to read their proprietary format LIT ebook format. In 2013, Microsoft released a Microsoft Reader application for reading documents in PDF, XPS and TIFF formats. Reader was included in Windows 8.1 and was a free download from the Windows Store for Windows 10. Microsoft discontinued the application in February 2018, as PDF reading functionality was moved to the Microsoft Edge browser.

From 2000 to 2012 there was no industry standard for ebook formats, it was the wild west. All sorts of formats were vying to be the industry standard for digital publishing. There was FB2, DIVU, LIT, LRF, FB21, MOBI, PRC, EPUB. Amazon purchased the Mobipocket company in 2005 and got the MOBI format, which was the basis for the Kindle book format. Market Forces determined EPUB to have the brightest future for North America and Western Europe, since it was flexible and is a technical standard published by the International Digital Publishing Forum.  It is the basis for the e-reading experience on Apple, Barnes and Noble, Kobo, Google and dozens of worldwide players.

The Microsoft Bookstore sells content in EPUB, but since the Edge browser has puny adoption rates, the company NEEDS to release a new mobile ebook app. Most people read on their smartphones and love to purchase ebooks. Microsoft does not have a mobile version of their store available for Android or iPhones, you can’t buy books.

I suggest that Microsoft release a dedicated ebook app where people can buy and read books in a singular app and is optimized for large and small phones. This will promote digital book sales, which obviously Microsoft wants, even if it accounts for a fraction of a percent in terms of their overall sales. Obviously their ebook unit will never compare to the sheer amount of money their operating system yields, Microsoft Office and 365 subscription sales, the cloud unit geared towards businesses or even their intellectual property and licensing division.

Microsoft has a small staff that run the Windows Bookstore and there are people held accountable for driving sales and working with publishers, in addition to curation. No web based bookstore will stay operational for long or gain any meaningful traction in the US, unless they embrace other platforms. Android and iOS should have an official Microsoft e-Reading app. Being able to buy and read books is critically important and it might promote more Cortana usage if they enhanced it for better text to speech capabilities. People will never embrace Edge as a browser on Android or their iPhone, but they will install an ebook app.