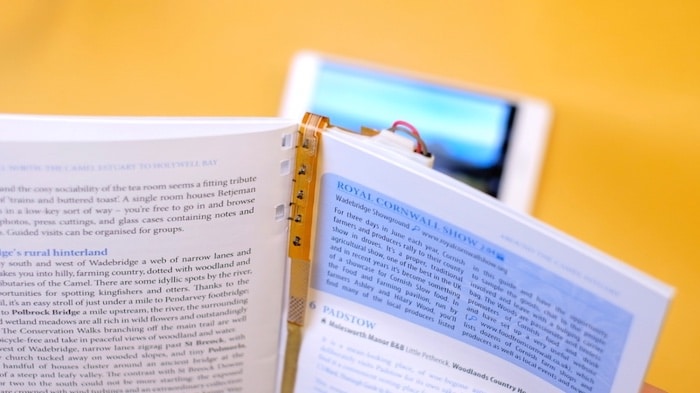 While eBooks have their own set of inherent advantages, none seem to be enough to make print books obsolete. This should explain the sustained demand for print books even after its digital counterpart being in vogue for years now. Such being the current state, there has been no let-up in efforts to make one have the feel of the other. For instance, eBooks have page-turn animations that mimic real paper or to have real paper integrated with digital bits to make it have some elements of eBooks.

In such a scenario, researchers at the University of Surrey have something very interesting to share in the form of what they have named The Magic Bookmark. As AllAboutCircuits reported, it essentially is a bookmarking device but one where the basic characteristic of the paper book remains unchanged. The only change that needs to be introduced to the book is to print a code that would be unique to the particular page and would act to identify the page.

The bookmark otherwise is a strip made of flexible material with advanced electronics and sensors embedded within it. That includes an infrared LED and an infrared-sensitive phototransistor pair. The way the Magic Bookmark works is this, the control electronics make a page number query, which acts as the trigger for the LEDs to illuminate the page. The phototransistors then capture the light that is reflected off each location. The output is then transmitted to a microcontroller unit or MCU pin which enables it to read the page number.

Using the device is simple too as it just needs to be clipped onto the page, similar to what you would do with a real bookmark. This way, there is no need to embed any electronic bits within the page itself, thereby making this approach a lot more cost-effective and sustainable in the long run. The only modification that needs to be made is to print the unique code on each page, which is akin to simple texts being printed on the page.

With the core technology developed and quantified, the next challenge for the researchers is to replicate the same with fully printed photosensors. This, they hope will make the Magic Book have the looks and feel of a conventional bookmark. However, it’s not known at the moment when is the earliest the Magic Keyboard is expected to make it to the market. While it no doubt is an interesting concept, it will be nice to see how it fares in the real world.