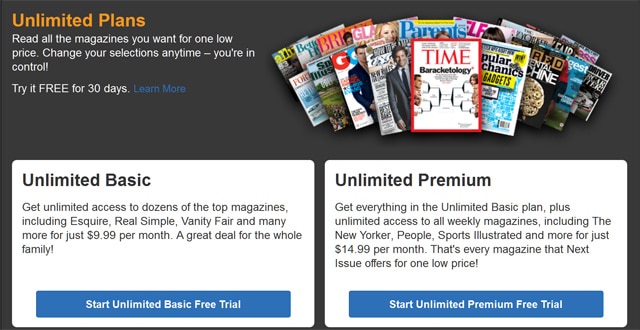 Next Media has just officially released their first Android offering that gives you unlimited magazines per month for $15.00. Currently, there are only 32 different publications you can get, but the company promises to expand the content fairly soon. This is fantastic for people who want to try different publications, but not be locked into a singular subscription.

Who exactly is Next Media and what do they bring to the table? Conde Nast, Meredith, News Corp, and Time iNC have all banded together as a coalition for this new venture. It is spearheaded by CEO Morgan Guenther who used to be the man in charge of TIVO.

32 different publications may not seem like a lot, but they include some fairly popular magazines, such as Better Homes & Gardens, ELLE, Esquire, Fortune, People, Sports Illustrated, The New Yorker, TIME, Popular Mechanics, and Vanity Fair. There are a number of pricing tiers available to meet your needs, but the most popular one seems to be the $14.99 edition, which gives you access to all of the above AND the weekly editions of the different magazines.

The economics of this deal in comparison to Zinio, Newsstand, and many other standalone apps really make a world of difference. For example, TIME is normally $30 a year, The New Yorker is normally $60 a year, Esquire is $20, and Better Homes and Gardens is $15. If you are a magazine fiend and read a ton of different ones every month, $14.99 is a nominal fee to browse their selection.

Next Issue is only a dedicated Android app right now that is available for free in the Android Market. It is USA only, which means you cannot download or subscribe if you are internationally based. In addition, it only works with Google Honeycomb tablets or newer Android OS’s. The company plans to roll out an iOS app in the near future and has been eerily silent about the Nook Tablet or Kindle Fire.