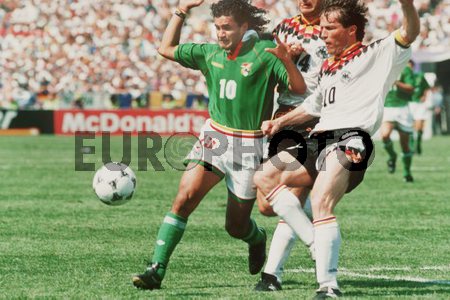 Participating are the news agencies ANSA from Italy, belga from Belgium, dpa from Germany, EFE from Spain, Lusa from Portugal, MTI from Hungary, PAP from Poland, Scanpix from Denmark, and Epa Worldwide.  The Euro-Photo project aims at digitizing historical pictures from the archives of 10 leading European news agencies. The pictures are free of charge for educational and private use and record major domestic and international events from the turn of the century to the mid 1990’s.

To date, this project has not been very accessible. Only 2% of the news agencies’ archives have been digitized and access to them has been mainly to professional picture buyers. The project is known as EURO-Photo and information can be found here. The image above is from the Deutsche Presse-Agentur and is of German defentar Lothar Matthaeus playing against Bolivia’s striker Marker Etcheverry in the opening game of the 1994 FIFA World Cup.

Thanks to infoDOCKET for the link.