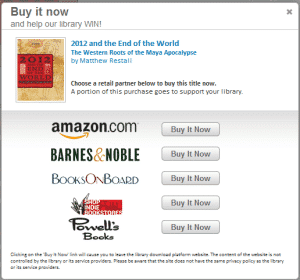 The Overdrive Win platform has been in development for over a year and gives libraries and patrons tons of new features. This ultimately will help Overdrive in their plight against the big six publishers that seem to all be pulling out of having their books available as digital downloads for free. Many companies feel that giving content away to patrons at the library undervalues their product and most see diminishing returns.

Buy it Now is one of the big reasons this new platform appeals to publishers and bookstores. When you look at a book or borrow it from the library you have the option to see it available at many leading book retailers. A portion of each sale is credited back to the referring library as an affiliate fee in the form of OverDrive content credit. Participating booksellers include Indiebound, Amazon, Barnes & Noble, BooksonBoard.com and Powell’s. More than 75 US libraries currently offer this feature, and it’s also in pilot in the UK at Hampshire County Council.

Another new feature is the “Recommend to Library” which gives you the option to browse all of the authors books. When browsing or searching your digital collection, users can click to view ‘Additional titles.’ This will display full publisher catalogs from those participating in library lending, including midlist and backlist titles that your library may not have purchased yet.  There will be options for the user to ‘Buy It Now’ (as described above) or ‘Recommend to Library’ (patron driven acquisition). In Content Reserve, your library will be able to view a list of recommended titles, set up a Recommend to Library Manager Plan to create select lists based on recommendations, as well as establish policies for the amount and frequency of recommendations permitted by a patron. Overdrive intends on launching a manager program in the next few weeks so different locations can keep track of the books that people want. This might cut down on the amount of books libraries “think” people want and end up not borrowing them.

Finally one of the greatest aspects of this new system is connecting authors and publishers with the patron. Not sure about a book and the description does not tell you much about it? You can view book trailers and get a sense of the major themes of the book and then even connect up with the authors via social media platforms. If the authors opt into the program they can list their Twitter, Facebook and Youtube channels.  Same goes with publishers, they have the ability to list their official social media platforms and establish a relationship with people who like some of the books they release.

This system should be rolled out to more libraries and internationally towards the summer time. We will be live on the scene in a few months with the American Library Associations conference in Anaheim to give you more news.