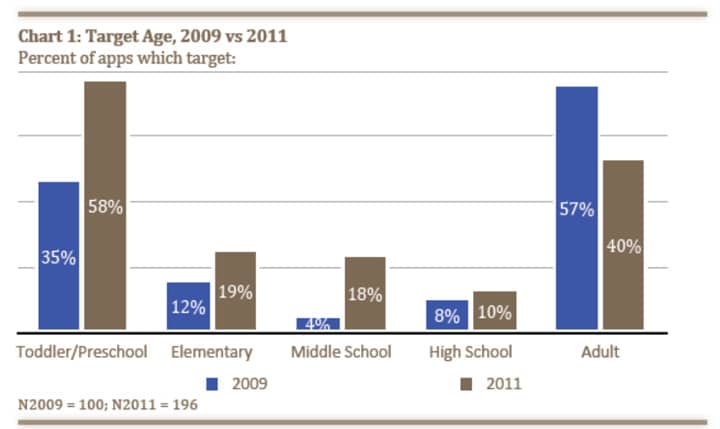 A recent report from the Cooney Center out today proclaims the rise of ebooks aimed at young and older children at the expense of enhanced books aimed at adults.

Two of the report’s key findings show a distinct trend on the marketing of educational apps. First, while the number of adult educational apps is decreasing, the percentage of apps for children has risen in every age category. Secondly, toddlers and per-schoolers are the most popular age category in Education (at 58%) and experienced the greatest growth over the past four years, a 23% increase.

The report mainly targeted the Apple APP store where major publishers such as Ocean House Media and iStorytime focus on for the majority of their content. Over 80% of of the top selling paid apps in the educational category were aimed at kids. One of the more striking aspects of the report was that most of the apps that sold the most did not feature well known characters but were mostly unknowns.

If you are thinking of publishing an enhanced ebook with video, audio or other multimedia elements this recent report gives companies some advice. They found out that the average app that sells well is priced between .99 and $1.99 which fits into most peoples budgets. One of the problems is that a low price does not really sustain the business model. With skyrocketing development fees, social media campaigns and PR companies, it becomes a real challenge for publishers and developers to make money. One of the suggestions made in the report were to include expansion packs and bonus content to expand on the experience. They also suggested saving costs on development by reusing the same programming and app templates and use that to make even more content.

Over 109 different companies polled participated in this report and most relied on social media, app review websites and viral videos in order to promote their content. It is hard to get on the best selling apps list where you would enjoy the most visibility. Most of these companies told the reporter conducting the study that they intend on focusing on the pre-school and elementary markets which are set to go on the rise soon. Over 20% of the apps listed on iTunes were aimed at this age demographic but they accounted for 50% of the bestsellers in the kids and educational categories.

If you are in the business of making educational apps or enhanced books aimed at kids you will want to read this report that debuted at CES in the Kids Zone. The Full PDF to read is available by clicking HERE.