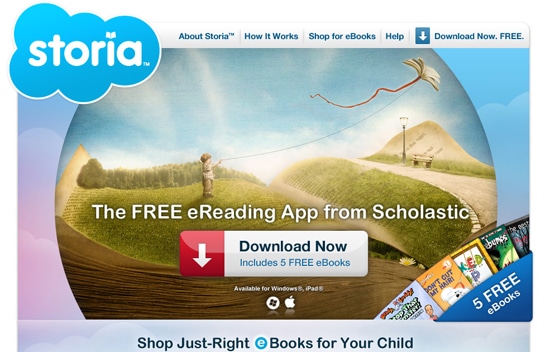 Scholastic Publishing and Books is launching a new program currently in beta called “Storia.” It is a proprietary ebook platform for selling and distributing their content to end users and schools. The beta test features 1,300 titles with the vast majority published by Scholastic; Deborah Forte, executive v-p and president of Scholastic Media, said she expects Storia to have about 2,000 titles when it makes its official debut in the fall.

The Storia platform is available on the Windows OS only right now but the company has promised an iPad app next month. It is a free download and appeals to youth aged 3-13 and comes with six free books. These are not no-name editions either but feature seminal characters such as Clifford – the Big Red Dog. Books on the ecosystem will be seperarted by age group and reading style. Some books will feature interactive elements and the cost is said to be between $2 and $20.00.

Scholastic is launching their beta service with over 1,300 books and will compete against Barnes and Noble and Amazon. Currently Nook Kids has been a program running for the last two years and they only have 1,600 titles in its library. Scholastic is betting that they will become an online destination for people wanting to buy their kids books because its compatible with most platforms and does not lock you into a specific device.