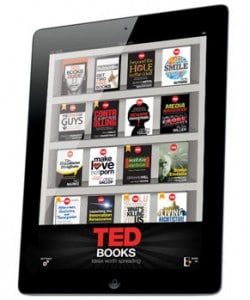 If you haven’t heard of TED before, what rock are you hiding under? The annual speakers conferences happen a few times a year and encompass the greatest thinkers, scientists, and other seminal people of our time giving quick speeches on a myriad of topics. TED has transcended videos and gone the route of eBooks for IOS, which are available now.

The new TED APP for iOS lets readers buy eBooks for $2.99 each or you can take out a subscription for $15 for a three months. The subscription aspect gives you access to all of their content. A TED spokesman said “We’re releasing a new book every 2 weeks, and we’d like people to own every single one of them. Why? The same reason why many people want to watch a wide range of TED Talks. There’s terrific benefit to signing up for breadth of knowledge as well as depth.”