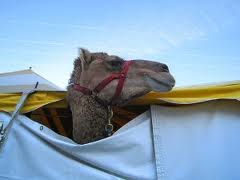 There is an old Arabian proverb, “If the camel once gets his nose in the tent, his body will soon follow.” It may apply to Wiley & O’Reilly creating another important crack in the DRM wall. O’Reilly Media has always been a vocal supporter of DRM-free ebooks. The company is beginning to convince other important publishers that DRM-free is the way to go.

Today O’Reilly and Wiley announced that O’Reilly will become an online distributor for Wiley’s technology ebook program.  This includes famous brands like For Dummies, Wrox, and Sybex. All told, nine imprints are covered with over 3,000 individual items.

“Partnering with another publisher, one that shares and embraces similar digital content ideals—where content is made available to customers in multiple digital formats, all without DRM—is particularly gratifying…”

When something as big as the For Dummies series goes DRM-free, then it may become the proverbial camel’s nose.