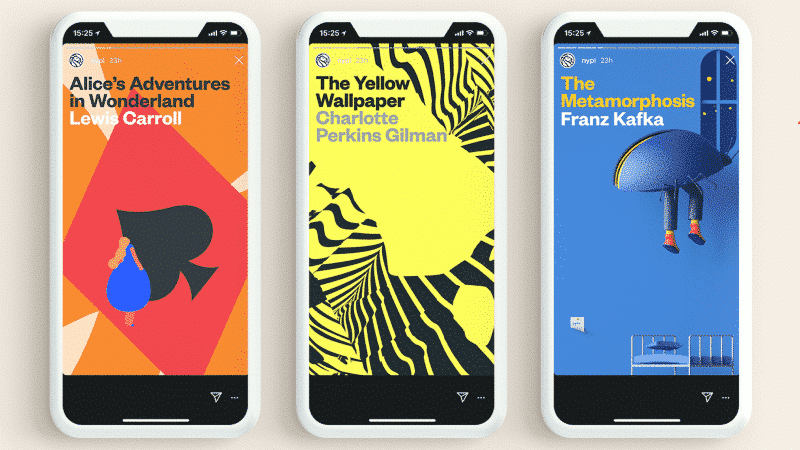 Instagram is primarily a photo sharing app and it is owned by Facebook. It is a place where people augment the the pics they take on their smartphone with a myriad of customization options. The New York Public Library is taking a calculated gamble that people might want to read ebooks on Instagram too.

The first part of the InstaNovel version of Alice in Wonderland is about 80 pages, but it’s a quick read—the perfect length for a subway commute. NYPL says it plans to release the second part of the book on Thursday. You can read them at the library’s Instagram account (@nypl).

Within the next few months, look for two other literary works that will be released on the Library’s Instagram account: “The Yellow Wallpaper,” a short story by Charlotte Perkins Gilman and The Metamorphosis, a novella by Franz Kafka.

In media messaging, the library’s staff writes, “The full book, short story, or novella is uploaded into Instagram ‘Stories,’ complete with unique and engaging design elements. The Instagram-specific design includes stills and videos that mirror the unique layouts of the original works. The background is a warmer white that’s easy to read on screen, and the font is Georgia.”

The delivery dynamic, itself, is interesting: “Readers rest their thumbs on the screen to hold the page. They lift their thumbs to turn the page. The thumb holder also doubles as a flip book: if a reader lets the book run they see an animation.” Because the “Highlights” feature is used to save each novel as a work of digital literature for readers to access when desired, a user’s “Highlights” becomes a digital bookshelf.

It is a place where people augment the the pics they take on their smartphone with a myriad of customization options, before waiting to see how many likes they can get on their Instagram uploads.

Will anyone read ebooks in Instagram? As Sarah Cascone said “It remains to be seen whether anyone is truly clamoring for real stories on Instagram—the app has been repeatedly criticized for offering unrealistic, glamorized portraits of its users—but it is an ingenious way to  get people reading. Jennings Brown said “It’s also a nice reminder that books are a great escape from the fresh, new nightmares we awake to every morning.”

I think this is a cleaver PR campaign for the New York Public, it shows they are attempting to be progressive, but i think this is just a ploy to get libraries to sign up and use their open source SimplyE app. They launched it late 2016 and it allows you to browse the New York Public Libraries entire digital catalog of 300,000 titles. This includes e-books from the libraries own royalty free collection, 3M and Overdrive.