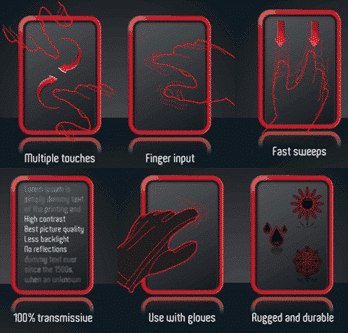 Neonode zForce technology has been seen in a slew of lower-end eReaders for a number of years. The company estimates that it holds 80% of the market for touchscreen interfaces in black-and-white eReaders. This all might change in 2013 as major companies are abandoning the Neonode technology and instead going with Capacitive Multi-Touch.

If you ever had a Kobo Touch, Kindle Touch, or Barnes and Noble Simple Touch Reader, you have experienced Neonode technology. There are small infrared areas built around the side of the bezel that allow for a finer pin-point accuracy when interacting with the touchscreen.

The biggest customer Neonode has was Amazon, which accounted for 50% of the company’s entire revenue in the last two quarters, and 40% in 2011. Barnes and Noble was the second largest customer with 26% of licensing, followed by Sony at 21%, and Kobo with 11%. This amounted to a grand total of $5.8 million dollars in all of 2011. At a recent earnings call, the CEO of Neonode confirmed that Amazon was no longer a customer. This is mainly attributed to the discontinuation of the Kindle Touch.

The Kobo Glo and Amazon Kindle Paperwhite are abandoning the zForce technology and instead going with capacitive multi-touch. This is indicative to the higher-end nature of the products and customers are willing to pay a premium to enjoy an eReader that lets you read in the dark. Barnes and Noble, Kobo, and Amazon are all are pumping out a myriad of tablets that no longer employ this technology.

With so many of the major companies not using Neonode’s technology, what will happen to the company? It is still being paid licensing fees continuously from all the big name companies, mainly through the patents Neonode holds on touchscreen technology. Apple recently inquired about a possible purchase of the company to help in its growing patent disputes across the globe.

It really comes down to most major eReader companies evolving past super cheap devices and competing with better hardware and core features. The entire glowing screen syndrome is reverberating throughout the industry and many of the top players have already produced solid eReaders that use it. Even the smaller companies are getting into the game, such as Onyx Boox and Pocketbook.

As much as hardware is evolving, there is still a strong market for budget eReaders. The Barnes and Noble Nook Simple Touch, Kobo Mini, and Sony PRS-T2 are still being produced. They are not being made in super high volumes right now, because most people are gravitating towards tablets like the iPad or Kindle Fire.

Things aren’t all doom and gloom for Neonode. The company was just awarded with the “Best Optics and Photonics Company of the Year 2012” by renowned organization PhotonicSweden. Neonode was awarded for its contribution to the touch industry due to its technology innovation, successful economic ventures, and excellent growth and profitability.

It is safe to say that when you lose your biggest customer and your existing base is not mass producing digital readers anymore, something needs to happen. Neonode is in the late stages of expanding from its core business and diversifying into mobile phones, tablets, office equipment, in-car infotainment displays, GPS, gaming devices, and toys. The majority of those products are intended to be launched during 2013 and onwards. With around five million in liquid capital currently, Neonode does have the cash to fund various new ventures.