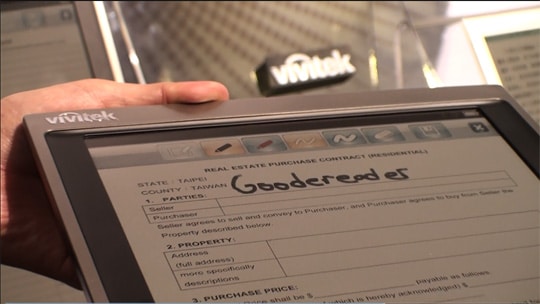 Bridgestone has been demonstrating its color e-paper technologies for a few years at various conferences and trade-shows. We have caught up with the representatives on many occasions and talked to Bridgestone’s major partners like Delta Electronics. Today Bridgestone announced that they were getting out of the e-paper arena and leaving their partners to fend for themselves.

The company has made this decision after careful consideration of its options and a desire to stay in accordance with its management principal of “selection and concentration,” which Bridgestone is implementing to put an increased focus on its core businesses to provide maximum value to its customers and shareholders. Due to increasing competition and rapidly declining prices in the liquid crystal panel business, the company decided that the best course of action for its overall business is to exit the electronic paper market.

Bridgestone, best known for making tires, had developed QR-LPD (Quick Response Liquid Powder Display) screen technology that was created through a joint partnership by Bridgestone and Vivitek. It’s basically a screen and a logic controller system for electronic readers that promotes a low power consumption while displaying 4096 colors. One of the big new factors in this technology is the .08 second page update and supports different types of page refreshes. It can do partial page updates, full page updates, and supports touch screen and stylus interactions. The screen technology can support from 8 inches all the way to 21 inches and does around 4 levels of gray-scale. Like Pixel Qi, the big selling points to clients wanting to employ QR-LPD is the ability to read it in direct sunlight.

All of the companies involved in this new breed of technology developed e-readers as small as six inches and as large as 21 inches. It really was the 21 inch model with a resolution of 2,560 x 1,920 pixels for the mono panel and 1,280 x 960 for full color that drew the largest amount of industry attention.

None of these devices, after three years of development, really ever saw the light of day, but Delta Electronics did issue the Aerobee e-readers that never saw market penetration. It is a shame that this technology really never took off. It had tons of potential but no one really invested a large amount of capital into consumer releases. When we spoke with Delta and Vivitek, their priorities were never the public but instead focused on niche segments like real estate and education.