You are here: Home / E-Ink, Clearink, Plastic Logic and E-paper News / Giving life to trucks with location-triggered ads and notifications 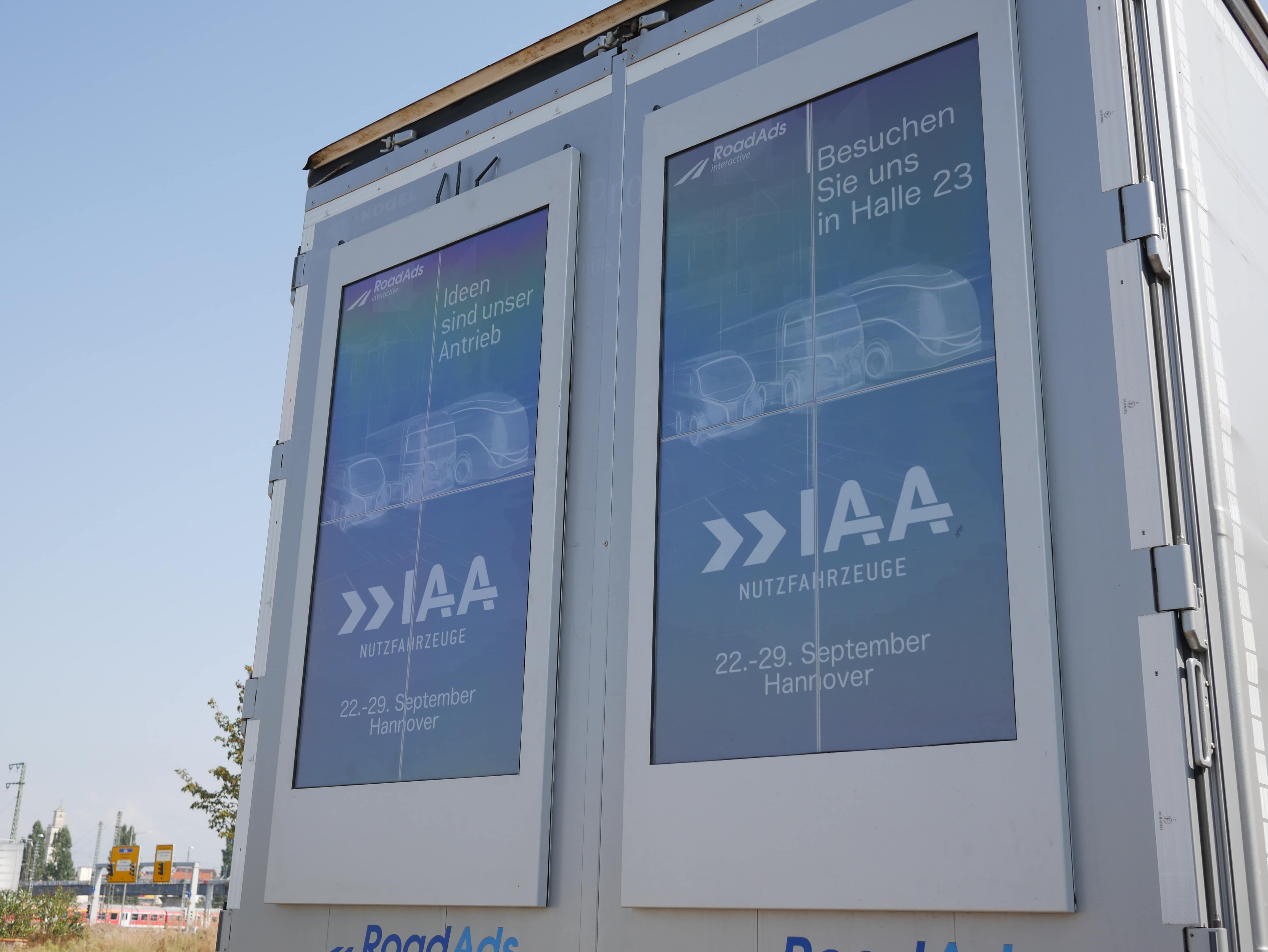 “Our objective was to give life to surfaces around us,” said Barrett Comiskey, the inventor of electronic paper when asked about the idea behind electronic ink, “and to do so in a way that we’re accustomed to, as opposed to the somewhat intrusive, glowing nature of the emissive displays like LCD.”

This objective is now becoming a reality. Joining the long list of versatile projects realized on electronic paper are truck billboards, giving life to vehicular media by displaying location-triggered content in real time.

Powered by Visionect and developed by RoadAds interactive, the e-paper truck billboards show actionable ads, such as the next turn to take to reach a nearby restaurant, as well as location-specific information on traffic jams ahead, the distance to the next gas station, and even notices about changes in road signalization. 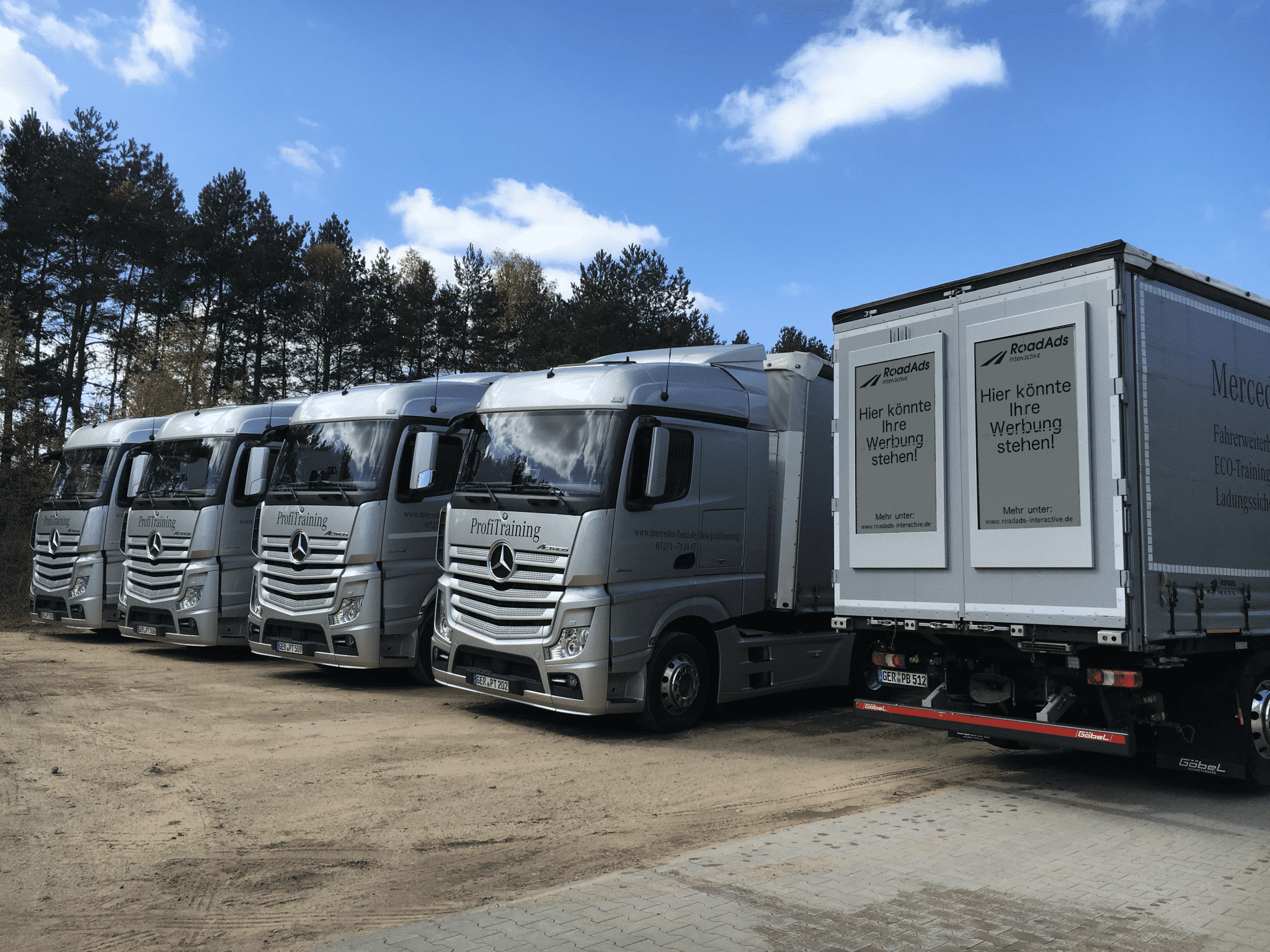 “There are about 2.8 million trucks in Germany alone, with each of these trucks having more than 50,000 views a day,” explains Andreas Widmann, the Managing Director of RoadAds. “It would be a perfect advertising space if not for the limitations of the printed ad. As a truck moves from Frankfurt to Paris, the ad from a local Frankfurt restaurant in German is no longer effective and the opportunity to benefit from the ad is lost.”

Widmann’s idea was to bypass the weaknesses of conventional print advertising – long lead time due to installation, content that goes unchanged for months – and create a solution that would be adjustable to location and specific trigger events.

Pursuing a real-time moving billboard and supported by Mercedes-Benz, RoadAds began developing a prototype. The company soon discovered that LCD or LED required excessive amounts of energy to run, putting significant strain on the truck’s battery and causing the display to overheat, which was made worse in direct sunlight.

In order to be seen clearly, LCD and LED displays also had to be backlit, emitting high levels of light pollution. Any of these screens mounted on moving vehicles prove a distraction for drivers and are not allowed in traffic, breaching the European legislation on motor vehicle lighting devices. 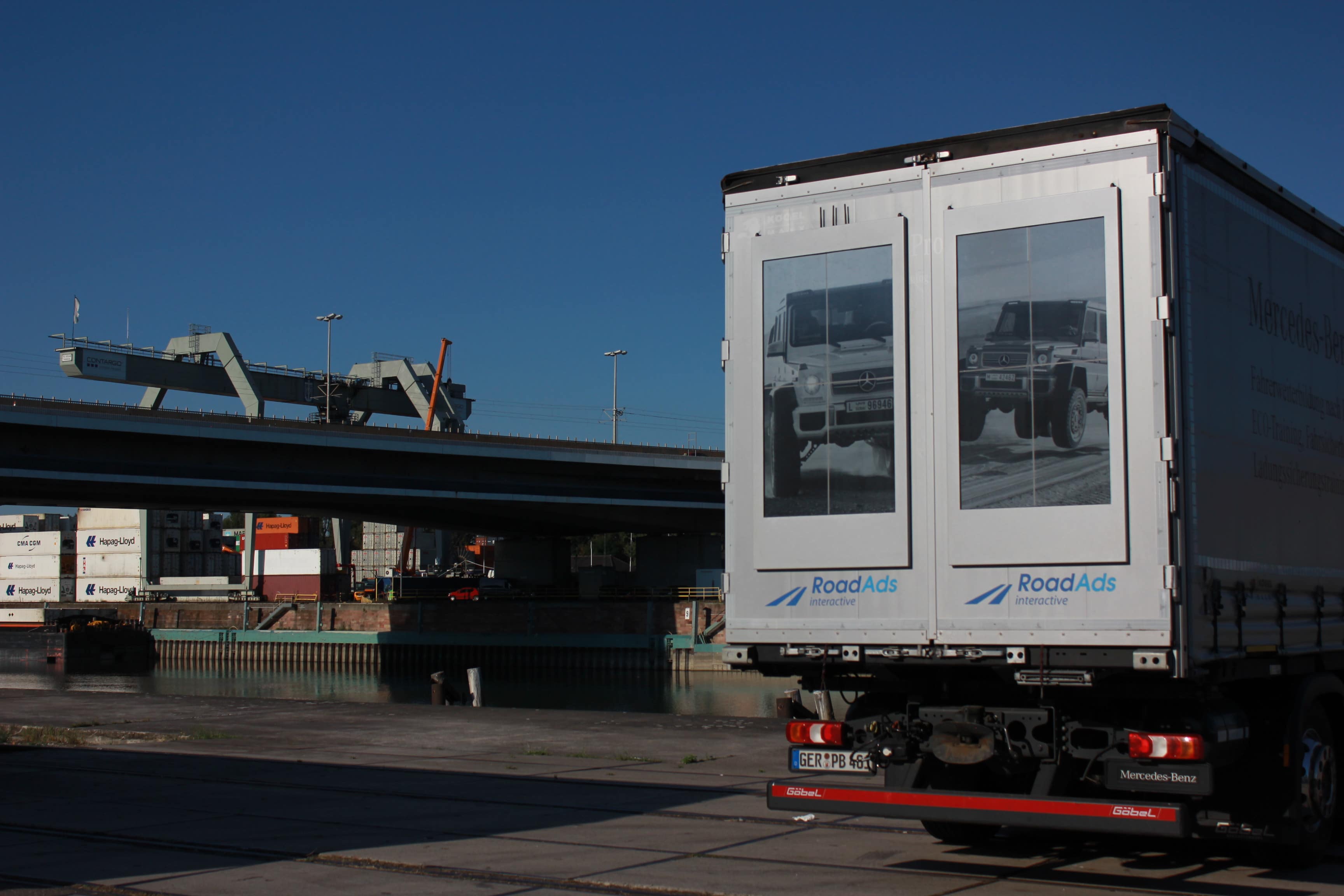 Looking for a solution both in terms of visibility and power consumption, RoadAds partnered with Visionect, the global leader in low-power electronic paper signage installations. Electronic paper technology was chosen because it uses energy only when changing content and features paperlike readability in direct sunlight, foregoing the need for backlights.

RoadAds combined four 32-inch Visionect-powered E Ink® displays in tiled billboards mounted at the rear of a truck. Visionect hardware and software enable the display module – each of its tiled screens with a resolution of 1440 x 2560 pixels and 16-level grayscale – to refresh content simultaneously, drawing a 3 by 5ft image.

Running on electricity from the car battery, the electronic paper truck display can be easily mounted on almost any truck and can only be removed with access to the vehicle itself. The display enclosure is compliant with the IP65 standard, making it dust resistant and fully waterproof, suitable even for the carwash. 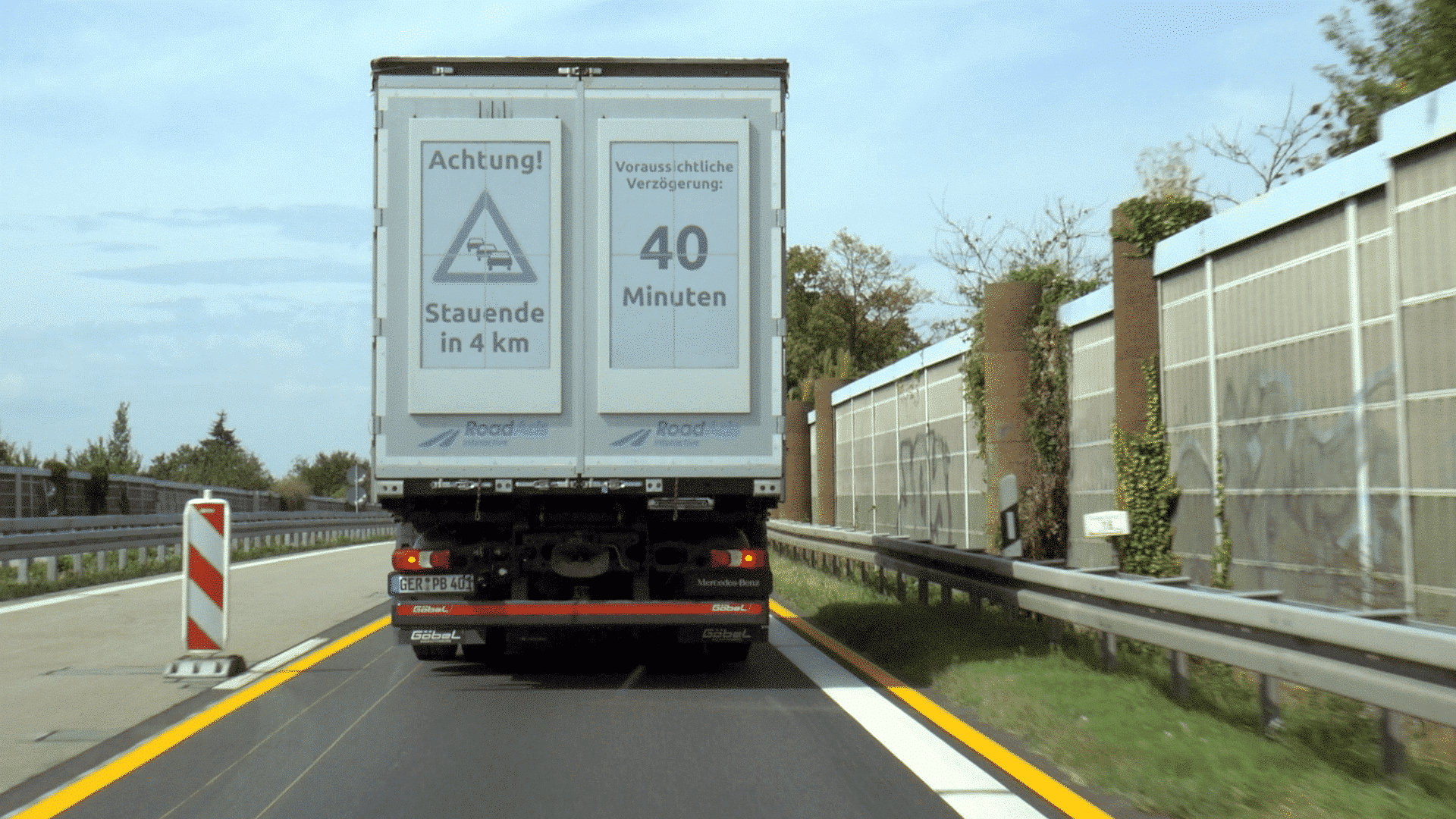 Each electronic paper truck display is equipped with GPS, 4G and Wi-Fi modules. With the help of the RoadAds centralized online platform, a truck’s location can be determined to within a 16ft accuracy and the screen content adapted to create location-targeted messages delivered in the language of choice.

This GPS-triggered messaging on the road not only delivers ads for businesses and services available nearby, but also real-time notifications about traffic conditions, road safety, weather warnings and more. Electronic paper truck displays can warn other drivers of traffic jams or accidents ahead, of diminished road visibility, can communicate the distance to the next gas station, the next turn to take to make it to the nearest McDonalds, and even warn of changes in road signals.

Now accepting pre-orders, the first 1000 electronic paper truck displays are expected to become commercially available in June 2017, with five trucks hitting the roads this November as part of a pilot trial. Until then you can see the e-paper billboards in action at the IAA Commercial Vehicles conference, September 22–29 in Hannover, Germany.

Ursa Primozic is the Communication Manager at Visionect,
developers of an ultra-low power electronic paper display platform
which enables the use of digital displays in environments before not possible.

She is directly responsible for creating the content for Visionect, which
includes case studies, news releases and anything related to the public persona of the company.