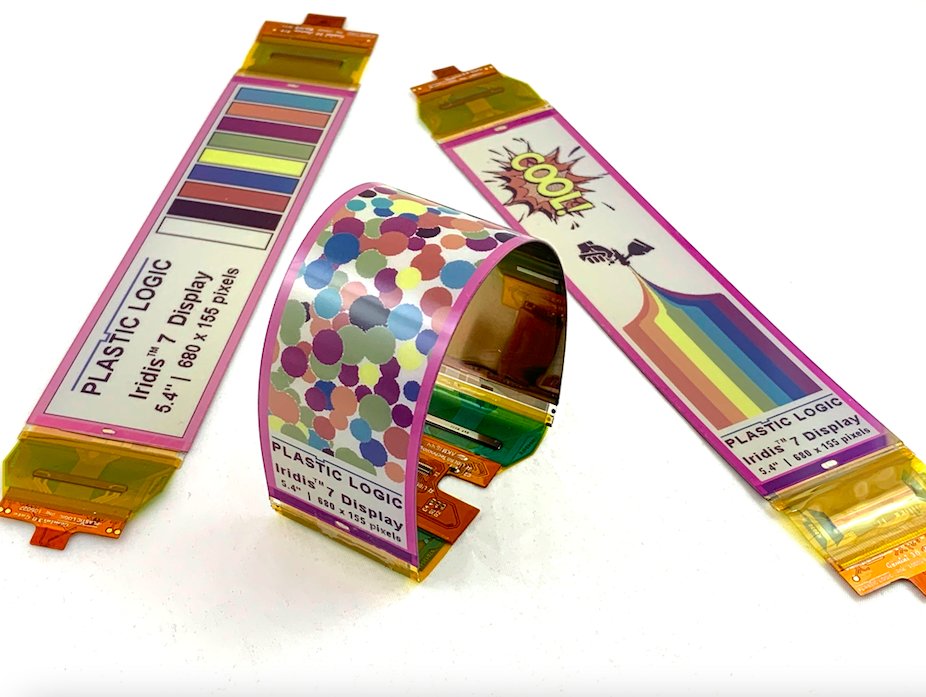 Plastic Logic has just unveiled a new breed of flexible color e-paper displays that will power the next generation of smart accessories, such as bracelets or smartwatches. It will be able to display over 40,000 different color combinations and the resolution will be 680×155 with 130 PPI. The board that powers the display will have compatibility with WIFI and Bluetooth, to control what is displayed on the screen via smartphone apps. Plastic Logic has made the screen compatible with Linux and Android, but might add Arduino at a later date. Engineering samples are available now, by request only.

As well as flexibility, which is key to wearables’ design, Plastic Logic’s displays are extremely robust as well as ultrathin, lightweight and flexible, making them ideally suited for integration into wearables that need to withstand the wear-and-tear of daily usage.

“Wearable device designers can now source innovative flexible colour display technology to incorporate into applications including smart jewellery, smart clothing and even smart health-tracking devices,” said Tim Burne, CEO, Plastic Logic. “Colour really enhances the functionality and look-and-feel of any smart wearable – in fact, it makes smart wearables even smarter. When it comes to wearable products, we’ve proved that you don’t have to trade visual appeal for functionality,” added Tim Burne. “We have already worked with several smart jewellery manufacturers, developing wearable display solutions for their innovative products. There are many more wearable applications that this technology is perfect for.”

The smart wearables sector is the primary focus of Plastic Logic for the foreseeable future. In December, they announced  flexible color e-paper called Legio and consists of an active matrix electrophoretic display which has an integrated EPD controller + source and gate driver IC bonded on the plastic substrate. The display is based on organic TFT active matrix and has a resolution of 240 x 146 and 132 PPI. It is able to display four colors with red, blue, green, yellow plus black and white. One of the downsides of Legio is the refresh rate, it will take around 15 seconds for a full page refresh.