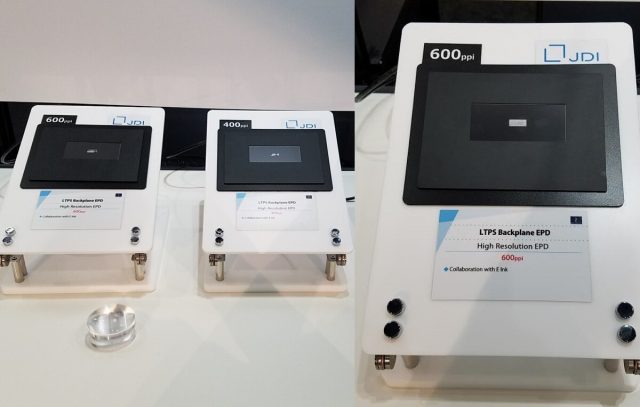 In early 2018 Japan Display developed an e-paper backplane that is compatible with E Ink and it can achieve resolutions of 400 DPI to 600 DPI. This will allow products using electronic paper to have higher resolution, such as WXGA and FHD for displays, the same as high-end smartphones and high-quality printing. Will we see see this technology in any e-readers in 2019?

Japan Display and E Ink formed a long-term strategic alliance in late 2016. This alliance was formed to increase the resolution in Carta HD based e-readers. Traditionally the highest resolution that is possible is 300 DPI and it is included in products such as the Amazon Kindle Paperwhite, Kobo Clara HD and Barnes and Noble Nook Glowlight 3. 600 DPI would basically increase the resolution in e-readers dramatically and the text would be razor sharp. 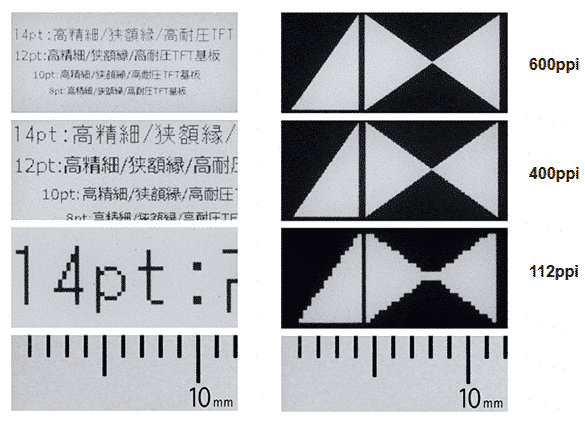 You can see in that (highly magnified) picture just how much more information can be fit on a higher-DPI screen, and how much less aliased angled lines are. Really, this will make reading ebooks look fantastic.

In order to take advantage of higher resolution screens, e-reader companies have had to develop their own fonts. Amazon Ember and Bookerly are two fonts that were exclusively developed for Kindle e-Readers. Bookerly is a serif font and is available on most Kindle e-ink devices, but also on the company’s line of Fire Tablets. Ember on the other-hand is a sans-serif font and first showed up on the first generation Kindle Oasis. Kobo also developed their own in-house font called Nickel and Google released a new font exclusively for high resolution displays called Literata which replaced Droid Serif. It is very likely that these fonts would have to be further augmented in order to give users a breathtaking experience with a 600 DPI screen.

I believe increased resolution will lead not only to better e-readers that offer more clarity, but also other products. Color E Ink would benefit greatly from this technology, it would be interesting to see if the new ACEP would see a performance upgrade. Smartphones like the YotaPhone and whatever comes after would also benefit, in addition to the next generation Sony FES Watch or upcoming products like jewellery.

The President of E Ink Johnson Lee told Good e-Reader that “As our partners have demonstrated, E Ink is compatible with very high resolution backplanes. These backplanes cannot only make the display even more paper-like in terms of resolution for text and images, but they can also be lower power using an LTPS backplane. We partner with Japan Display Inc (JDI) because they make one of the best LTPS TFTs in the world. Plastic Logic, the technology that originated from the labs of Cambridge University, makes one of the best organic TFTs in the world. As a display provider, we offer our customers a range of configurations in terms of resolution, backplane technology and power consumption. We cannot comment on our customers’ product plans, but could see a benefit to a higher resolution display as eNote devices for work and school become more common.”