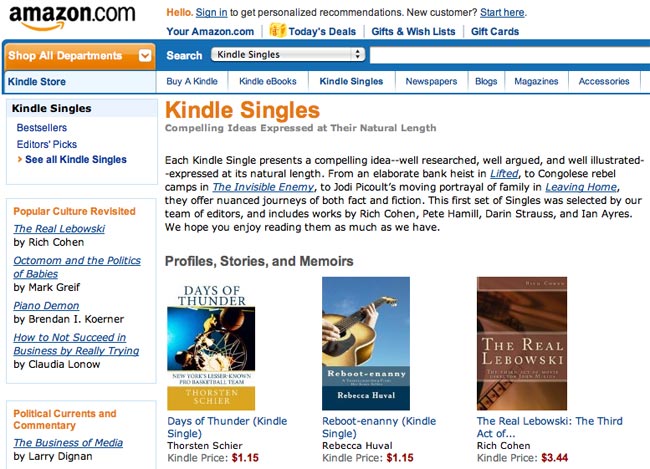 Amazon launched its Kindle Singles site earlier this year, and despite its popularity—six titles in the Kindle Singles store were ranked in the top twenty for all Kindle downloads, ebooks included—and a wealth of submitted material, this seems to be one avenue in which Amazon is not willing to give authors free reign. All submissions of the 3,000 to 5,000 word titles are read and reviewed by real people before being passed on to the site for purchase and download, according to Gabe Hash in an article for Publisher’s Weekly.

This model would appear to be the polar opposite of the Kindle Direct Publishing concept, which lets anyone who retains the rights to a document or manuscript code and publish it to the Kindle store, practically anonymously. This method of ebook distribution and sales has resulted in the much-discussed piracy and spam concerns that some say are apparently threatening to take over the Kindle store. Some opponents have spoken out on the need for a human review of each uploaded file prior to publication, something that Amazon simply cannot do when working in the sheer volume of ebooks that it does.

Kindle Singles, however, at present only launches about three new titles per week, a number that Amazon seems happy with for now. This minimalist approach to digital short story publication has ensured that only actual titles make it past David Blum, the live gatekeeper who reads each submission prior to posting it live to the Kindle Singles catalog. It almost seems like Amazon has it backwards, as they are commissioning a live review of each title in the Kindle Singles division while knowing that those titles sell for as little as 99 cents, while their ebook division can charge far more for a title but does not provide the same attention to detail as the Kindle Singles.

For now, Amazon has not had a lot of concern regarding potential fraudulent short stories, as many of the stories in their catalog are submitted by well-respected and published writers; in many cases, it is not the author who makes the submission, but the publishing company who owns the rights to the work. This is not to say that self-published authors can’t submit material, but with a hoop to jump through prior to publication such as Blum, there’s a very real chance that the short story will never see the light of Kindle Singles day.