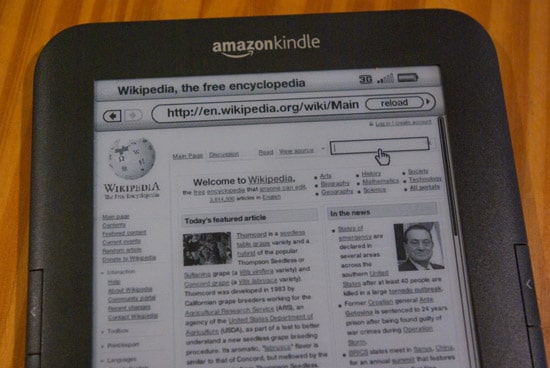 Amazon has offered various e-readers over the years with built in 3G internet access. This has always been a free service once you ponied up the initial amount of cash to buy a device with 3G enabled. It allows people to buy ebooks, newspapers, and magazines while traveling. Recently, Amazon has imposed a bandwidth cap on customers using the internet browser to purchase content and surf the internet. They have imposed a 50 MB bandwidth limit on the Kindle Keyboard and Kindle DX’s internet access. All other e-readers with 3G access are immune to this new restriction, so it might be time to upgrade if you use it frequently.

The free 3G internet access that comes with the purchase of an e-reader that has it enabled gives more freedom than just surfing the internet and buying content. Many users in China use Amazon’s service to bypass the Great Firewall by tethering their Kindle to their computer or phone. Many users claim they can access banned sites such as Facebook or Twitter. The 3G Kindle uses global system mobile (GSM) communication technology, which gives WiFi coverage in more than 100 countries, including China. The servers that allow China to use its internet access are stored outside the country and because the devices are not officially for sale in that country, it is a viable option for customers to surf the internet unimpeded.

The limitations of internet access only apply to websites outside of Amazon and Wikipedia. You can continue to download content directly from Amazon as much as you want, without worrying that you will go over your cap. This might be the push you need to upgrade from an older model of the Kindle Keyboard if you use the device to surf the internet lots. If you live outside the USA you can purchase a 3G variant of the Kindle Touch at Shop e-Readers.