You are here: Home / e-Reader News / Amazon no longer has an Australian Kindle Distributor 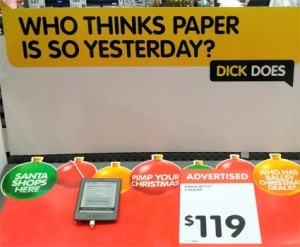 Dick Smith Electronics was appointed by Amazon to be a Kindle distributor in early 2013. There was a small display of some Kindle Models in each of its many stores, but never were seriously promoted. It looks like Amazon may have to find another Australian electronics company to deal with because Dick Smith has been liquidated.

Most of the Dick Smith stores are still operating as they attempt to dispose of their stock at ever increasing discounts. The entire line of Kindle e-readers are now 20% off and can be purchased in the retail stores or online.

It will be interesting to see if Amazon decides to partner with another electronics company or a bookstore chain. I hope that Amazon opens their own bookstore in Sydney or Melbourne, so people can buy books and shop for Kindle hardware.

Update: Amazon wrote me and said “We wanted to let you know that Kindles are available at Officeworks, Big W, Target and selected Telstra stores in Australia.”

I find it interesting that on the Officeworks website not a single Kindle product has a review, this company isn’t doing a good job at marketing Amazon products. Big W also doesn’t sell Kindle products online either.