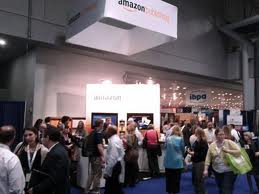 Amazon has made some of the largest strides in ushering in a new publishing model, larger than possibly any other major name, adopting models for self-publishing print books through its adoption of CreateSpace. Amazon has three distinctly separate publishing models under its wing, with CreateSpace for print-on-demand hard copy books, a digital self-publishing model for ebooks through Kindle Direct Publishing, and in 2009 it took on the role of a full-scale traditional publisher, recently hiring widely respected former CEO of Time Warner and literary agent Larry Kirshbaum to head up Amazon Publishing in May of this year.

For all that Amazon has a reputation of embracing all things indie and digital publishing, today’s announcement regarding the hiring of Julia Cheiffetz, a former senior editor at HarperCollins, to lead as the editorial director for Amazon Publishing made it clear in no uncertain terms that this branch of the Amazon family is all business when stepping out as a traditional publishing model.

When Amazon announce the hiring of Kirshbaum on May 31st, many publishing industry insiders may have felt it was yet another nail in the coffin for publishing. Some felt it was going to quickly become impossible to compete against the finances and clout of Amazon, especially with the Kindle e-reader access.

However, in today’s statement that was emailed to a number of agents regarding the hiring of Cheiffetz, Kirshbaum made it very clear that Amazon Publishing is not just another avenue for independent authors to squeak past the gatekeepers of the publishing industry with their renegade manuscripts:

“Julia’s sharp editorial sensibility and devotion to her authors, combined with her passion for new technology, makes her the perfect choice. She offers a unique blend of an entrepreneurial mind-set built upon a strong belief in the bedrock values of traditional literary and commercial publishing,” read Kirshbaum’s announcement, giving much-deserved obvious praise of Cheiffetz in her capacity as an editor.”

Communiqués like this one may not seem threatening on the surface, but what are these “bedrock values of traditional literary and commercial publishing” that Kirshbaum openly referred to? Could he be referring to keeping out the riffraff, unlike Kindle Direct and CreateSpace, who both let anyone enter? While hopefully Kirshbaum’s statement was nothing more than a well-deserved praise for someone who did a stellar job turning out bestsellers at HarperCollins, it reads almost like an intentional separation in everyone’s minds from Amazon’s two other cousins to the publishing industry.