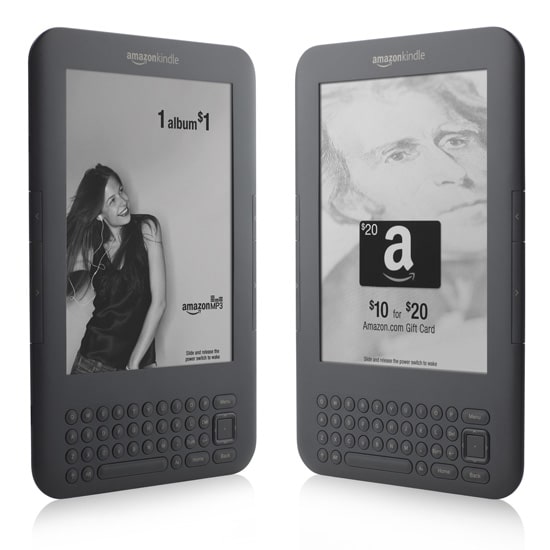 Amazon recently released a new Kindle WI-FI special offers edition. This is the same e-reader as the latest generation Kindle 3 but offsets some of the cost of investing in a new e-reader by displaying advertisements via the screen-saver and main menu. Instead of paying the normal price of the Kindle WIFI, which is $139, you can get it for $114. Amazon just announced today that they are now offering a 3G version of the special offers bringing the cost down to $164 instead of the normal price $184.00

There are a number of special offers that will be available for both the 3G and WIFI versions in the next few weeks. You will be able to buy select books for $1.00 instead of $10.00 and save 20% on a new HDTV.

The Amazon Kindle 3G Special offers editions gives you free 3G coverage all over the USA, Canada and most other countries in the world. It has a 6 inch screen with a resolution of 800×600 pixels, 167 ppi, and 16-level gray scale.

It has high contrast and the page turns are very fast, you can submit favorite passages to Twitter and Facebook. It even has a web browser to surf the internet. You can also listen to audio books and music while browsing your pictures. Simply put, the Kindle is one of the leading e-readers on the market and has a huge selection of ebooks to buy.

You can get the new Amazon Kindle 3G Special offers edition today by visiting here.