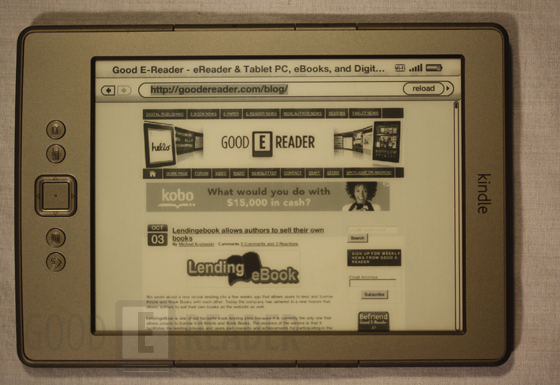 Amazon has opened up many international versions of its ebook store this year which steadily increases its global reach. Germany, France, Spain, and other countries have all been targeted with many other European countries to be opened up by the end of 2011 and during the first quarter of 2012.  The company is currently in talks with major Japanese publishing companies, according to the Nikkei business daily.

Currently Sony has one of the largest presences in the Japan market with the launch of its PRS-650 model at the beginning of the year. They made agreements with all of the major publishing, newspaper, and manga companies to sell content via their Sony eBook Store. The move into Japan was the second time for Sony and this time it worked. Partly because of the wider acceptence of electronic books, but also the public awareness of the technology.

Amazon is poised to be the second major international company to make a bid to compete in that market. They have been in talks with Japanese publishing and newspaper companies for a few months and have yet to iron out a concise agreement. The pressing concern from the publishing standpoint is the tendency from Amazon to provide content at rock bottom pricing to undercut the competition. The agency model does not exist in Japan and it has companies worried that they might not make very much money from the agreement. According to the Business Daily, Amazon is very close to ironing out the final details on the agreement. It involves a framework in which the timing and scope of price cuts would be discussed with publishers in advance.

A major stepping stone for Amazon is selling their new 4th generation Kindles in the retail market with custom firmware for the device to read Japanese characters and give the device the ability to be localized. The company knows they cannot exclusively sell the products on their new website in development for that market but they have to get their devices in the retail setting. Exactly who is going to sell them and for how much is yet an unknown factor.

The land of Rising Sun is a fertile ground for companies to enter the lucrative ebook market. It is very underdeveloped because of the competing standards in book and comic formats. The Jiji press estimates that the entire Japanese market is worth $846 million dollars for ebooks and two trillion yen for printed books and magazines.