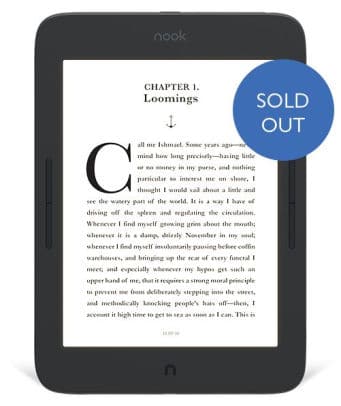 Barnes and Noble launched the Nook Glowlight Plus 7.8 inch e-reader online yesterday and it is already sold out. The e-reader continues to be available in all 600 retail locations, but many people have stated that there is little stock remaining.

The Nook being sold out can be attributed to two different reasons. When the e-reader hit store shelves on Monday I have heard over two dozen reports that there was a dead pixel on the screen, leading me to believe there might have been a quality control issue with the first batch of units. The other factor leading to stock shortages is that B&N simply did not realize how popular this reader would be with their customers. Each store was only allocated a certain number of launch day units, somewhere in the neighbourhood of 10 per store, and more if it was serving a huge urban population.

I believe that it is a combination of both of these reasons. Dead pixels on a certain number of units that could be identified by serial numbers, so B&N took them off of the market and the unanticipated demand, because this e-reader is the first time the bookseller decided to forgo a 6 inch screen and went with a 7.8 inch display. This results in more screen real estate for ebooks, comics, magazines and newspapers. It is also extremely affordable at $199.

No matter what the reason is, the Nook is officially sold out online, after a single day of being available. If it is pure demand, this is really good news for the ailing Nook division and means that they have a really popular product on their hands.